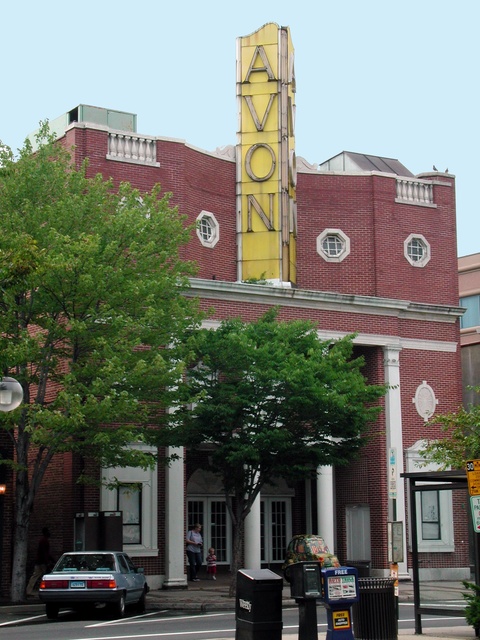 The Avon Theatre was opened on June 15, 1939 with a seating capacity of 780 in orchestra and balcony levels in a stadium plan. There were three large painted panels on each of the side-walls depicting pastoral scenes. The façade was in red brick with marble trimmings and white wooden columns. It was built by the Weiss Amusement Co. It was taken over by Trans-Lux who twinned it on April 2, 1980. It was later run by Crown Theatres until it closed on December 2, 1999.

In 2001, it was purchased by a private investor from Greenwich, Connecticut whose Avon Theatre, LLC restored the theatre.

The Avon Theatre Film Center re-opened on January 23, 2004 and currently shows art, foreign, and independent films. It had another reopening on February 11, 2014.

I’m a editor work on a movie magazine called “Movie View” in China.
I hope to make a friend with you who loves movie.
contact me:

the above wesite is not fo the avon theatre in Stamford , CT

The original balcony was actually stadium seating at the rear of the orchestra.

There are 592 seats, not 610. I was there for a special screening last week of “Sidewalk Astronomer.” Wow. Spacious inside. Ticket booth is on the left and concessions in the lobby on the right. The stairwell in the middle has a bannister and a stairwell on both sides. A great carpeted foyer and very nice tiled bathrooms are present. There’s a large sitting area with 4 nice leather chairs and many bookshelves where one can read and there’s a fireplace as well.

The large theater on the right side has 350 seats and the balcony has 242 totalling 592. I counted each one after the event. The main theater is gorgeous and very spacious. The seats are comfortable but very squeaky. There’s a stage with the screen and steps leading up from each side for Q and A. The seats on both sides' cupholders angle slightly toward the center but the seats are forward. There’s little lights under each aisle chair (armrest) on both sides of the aisle of the left and right aisle of the theater.

Watercolor paintings on cancas (3 on each side) adorn both walls. They look like murals but aren’t upon closer inspection. There are 2 undrawn red curtains on each side of the paintings with a horizontal light above each painting (that stay on with the aisle lights during the movie). On each side of the proscenium are 3D pedestals that come out with a painting in each one and it’s shaped like a half oval.

You can see the projection booth with curtains drawn on both sides and can tell it was the balcony at one point.

Standing in the lobby to the left is the mini-theater that was the entire balcony but it’s just half of it. The curtain in front has pink insulation behind it. There are 6, (3 on each side) original circular metal cutouts depicting ancient scenes of Peter Pan. The black iron is quite thin upon touching it and the current owners added multicolor gels that go around all of each one. 1 is a horse and buggy, 2 is a couple in Victorian wear with a house in the background, 3 is a pirate ship with the sun in back, 4 is Peter and Wendy, 5 is two folks and 6 is a bunch of Lost Boys by the water’s edge.

First listed in the 1940 Stamford City Directory at current address. In 1964, it doesn’t list the Avon, but rather the Bedford Amusement Corporation at 276 Bedford. In 1981, it’s listed as TransLux Avon Theatre. In 1989, it’s the TransLux Avon Twins Theatre. The 1994/1995 Directory lists it as the Crown Avon Twin.

In addition to its creative programming and special guest events, the Avon Theatre Film Center also lends a helping hand to the community. Thank you!

Enter for a chance to win and be featured on the Avonâ€™s magnificent screen â€" itâ€™s free!

Call For Entries: OPIN â€˜Pet Tailâ€™ Awards Video Contest
Does your pet have what it takes to be a star? OPINâ€™s 1st Annual Pet Tail Awards is looking for your short videos starring your cat, dog, bird, rabbit, or whoever you share your heart with.

About OPIN
Outreach to Pets in Need (OPIN) is a Fairfield County 501©3 non-profit organization whose mission is to decrease the population of homeless pets in Connecticut through medical treatment, training, public education, and placement programs.

Last night I went to a showing of the Original 1953 “It Came From Outer Space” in 3D. What an experience! This has quickly become my favorite movie house in Connecticut. You won’t find this atmosphere in any shoebox cinema!

When announced in Boxoffice of October 15, 1938, this house was to have been called the Park Theatre:

“Stamford, Conn. — F. E. Weiss of the Stamford Theatre has awarded the contract for a new theatre. The new house will be known as the Park and will be built on a site on Bedford St. opposite Forest St. Plans by Architect Hosenhauser [sic] of New York City call for a building of colonial design with stadium effect and will have a seating capacity of 750.”