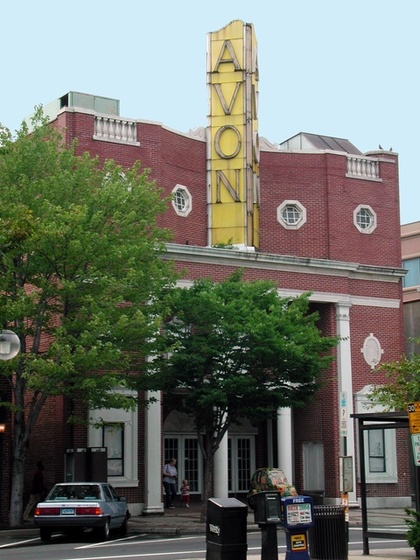 STAMFORD, CT — The Avon Theatre has garnered national attention for announcing a “no-refunds” policy for screenings of Terence Malick’s love-it-or-hate-it new film, “The Tree of Life.” After a series of heated interactions between frustrated (and sometimes angry) patrons, Adam Birnbaum, director of film programming at the Avon, posted a sign in the theater warning viewers that this was a “uniquely visionary and deeply philosophical film” that “does not follow a traditional, linear narrative approach to storytelling.”

“We wanted to be as informative and transparent as possible with patrons in the event that they weren’t aware that this wasn’t going to be traditional story,” Birnbaum told the Stamford Advocate. “We also wanted to protect our staff and preemptively defuse any future negative interactions that patrons and staff members might have.”

isn’t the theater’s “warning” sign an admission on their part that the film is an incoherent boring piece of cinematic claptrap?

That might be your opinion bigjoe59 but some critics are calling it a masterpiece and I have no doubt that it will be on most of the ten best films of the year lists this year’s end. Rotten Tomatoes says 85 per cent of critics liked it as well as 66 per cent of the public. I haven’t seen it but am looking forward to soon since I loved Malick’s “The New World”. It’s admittedly not for everyone, especially the “aliens, car chases and explosions” action flick crowd.

As far as the “no refunds” policy…I think the warning sign about the film’s content is appropriate but if I was manager I’d still give refunds for the first half hour or so but definitely not to people who stayed for most or all of the film after that warning.

i don’t mind slow paced films. A SINGLE MAN(2009) with Colin Firth was slow placed but wasn’t boring for a second. my point being there’s big difference between slow paced films and just plain boring ones.

Why should someone get a refund because he didn’t like the movie? If this was any theatre’s policy they would be out of business within a few weeks! I’ve seen a lot of crap but never once even thought about a refund. Imagine people wanting their money back after seeing an Adam Sandler movie movie because they found it stupid! C'mon!

I agree with stang119. It’s sad the theatre director was pushed to the point to have to put up a sign like that. He must have had to deal with a lot of unreasonable people. Patrons should know better. Some movies you will love, some you won’t – and you can talk about them later with your friends (Not during the movie). And not “liking” or “getting” a movie is not a good reason to ask for your money back. Can you imagine reading a book and returning it for your money back? Going to a play and asking for your money back? Going on a vacation and deciding you didn’t really like Venice so you want your money back? Nuts.

Sad that they have to warn people that a film may be too intelligent and a person may actually have to absorb and ponder it.

In all my years in the business I was only asked for refunds because someone did not like or get the movie a handfull of times.The theatre just showed the movie they did not write,film,or produce it.Thats like folks who go the a resturant and eat their whole meal and then ask for their money back because they did not like it.Buyer beware in any situation.

I have to admit that slow-paced films don’t particularly turn me on, but asking for a refund simply because they didn’t like or understand the movie…that’s ludicrous! It makes me wonder where people’s heads really are, at times.