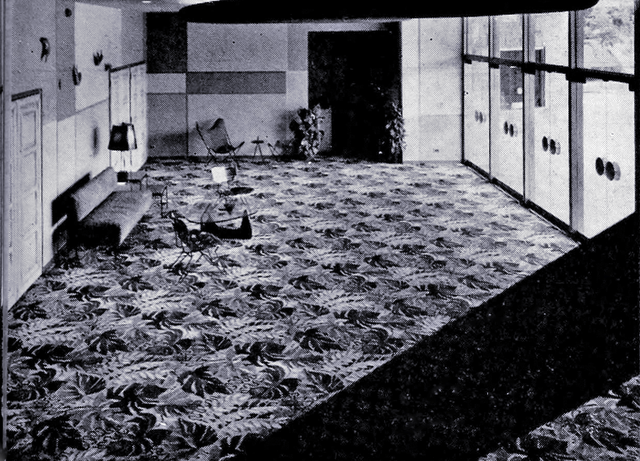 Located in the Ridgeway Center. Opened as a single screen theatre on August 31, 1951 with 1,100 seats. It was later twinned and after closing in 2001, was gutted and converted into office space.

No. 1st run distribution policies in those days demanded not only significant milage between major cities, but also strategic location. Stamford maintained the strategic access from both Westchester and Fairfield counties. Bridgeport was too close to New Haven and Stamford.

I remember those mobiles. They were removed when Trans-Lux renovated.
The Ridgeway is now L.A. Fitness

It was a beautiful 50’s style theater. Remember seeing “The Graduate” and “Good Neighbor Sam” there.

First listed in the 1952 Stamford City Directory. In 1982 it changes to TransLux Ridgeway Theatre. The 1994/1995 Directory changes to Crown Ridgeway. Last listed in 2002.

I biked by it the other day. Really sticks out. I went around to the back and it’s quite busy with loading docks, etc but you can see the brick pilasters on the side of the building and patched over old window/door entrances.

Anyone have any pictures of this house when it was open?

The February 2, 1952 issue of Boxoffice Magazine has an ad for Heywood-Wakefield theater seating featuring the Ridgeway, with a couple of interior photos and one of the exterior, all grey scale.

The text says that the theater was both designed and decorated by Alfons Bach. Alfons Bach Associates (the firm he founded in 1932) did design the Ridgway Center, as the shopping mall in which this theater was located was called. There is supposed to be material on this project in the Alfons Bach collection at the Cooper-Hewitt Design Museum in New York City, but I don’t know if it’s accessible to the public. It’s not online.

Bach was one of the major figures of modern design, and a co-founder of the American Designers Institute. Here’s a brief biography.

I am acually Nathan V Steinberg’s grandson have many great stories told to me over the years about this theatre from my father Fred….nice to know people have good memories of this place!

I used to come here towards the end of it’s run, when it was an art house theater. It was the only cinema in the area showing the films I wanted to see, so it quickly became a favorite of mine.

Had the opportunity to watch movies on both of the screens. The 2nd floor(?) theater had stadium seating, which was a rarity even in the late 90s.

I recall them scoring one last coup with The Blair Witch Project — I drove past the theater and saw a line of people queued down the block for that one. By then, evening showings had about 50 people at most, with matinees pulling in maybe 20.

Great memories of this place. I was very sad when I heard that it had closed. I suppose the Avon has now succeeded it in spirit, though I haven’t had a chance to check it out post-renovations.

I saw all three Star Wars movies there ( the originals) when they all first came out. I remember the lines for people trying to get in all the way around to the front of the shopping center. I remember when they had a balcony. This was a great theater but because it only had two screens I guess it couldn’t keep up. Is Sol’s toy store still there ??