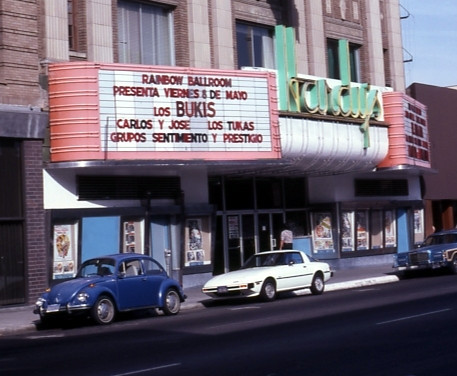 The Liberty Theatre is the oldest theatre in Fresno, and was built in 1917, opening on on November 27, 1917 with “When a Man Sees Red”. Designed in Second Empire Revival style by local architects W.D. Coates and H.B. Traver, responsible for Fresno and other California landmarks. It was renamed Hardy’s Theatre from June 24, 1931.

The 1950’s marquee of the theatre, whose exterior is remarkably well preserved, shows a later name, Hardy’s Theatre, while a large vertical sign displays the name MEXICO (Since the summer of 2005 this sign has been removed). The theatre was still open in 1981.

Fresno for a town its size has so many classic theatres that one could spend a half a day looking at them. Some others are Warnor’s Theatre, the Wilson Theatre, the Crest Theatre, the Tower Theatre and the Azteca Theatre.

In 2001 the city of Fresno began plans for a massive downtown revitalization but it is unknown what role the Liberty Theatre, which is on the Local Register of Historic Resources, will play. It had been in use as a Spanish Evangelical Church prior to 2005.

Here is another photo:
http://tinyurl.com/yld63xh

KFSR 90.7 held an event, “The Fresno Grand Opry,” in May 2011 at the Liberty Theater (Hardy’s). They asked us to do a video tour of the balcony area since it would be closed to guests. Here’s our video if you’re interested in seeing what this amazing theater looks like inside!

The partner of architect William D. Coates was Harrison B. Traver. Both studied in Philadelphia with the Beaux-Arts trained classicist Paul Cret around 1906-1907. They formed a partnership in San Francisco in 1911, and moved their office to Fresno in 1914. When the partnership was dissolved in 1925, Traver moved to Los Angeles and Coates continued to practice in Fresno. As far as I’ve been able to determine, the Liberty was the only theater they designed during their partnership.

Now a music studio Oct 2019. I hope some one saved the old classic theatre neon marquee sign that said Hardy’s?

This house should be listed as Hardy’s Theatre, since it was called the Liberty only from 1917 to 1931.

I literally saw hundreds of movies at the Hardys Theatre during the1950s and 1960s. “Everything from "Love Me Or Leave Me,” and “Some Like It Hot,” to “Tom Thumb,” “West Side Story,” “The King of Kings,” and “Who’s Afraid of Virginia Woolf?”

I would be curious to verify the original seating capacity of 1917. Some claim it was closer to 2000. Over the years the capacity shrunk. The insanely high and steep upper third of the balcony was sealed off. Projection booth always on the main floor so there were no “keystoning” issues with the screen image. The 1950s remodel with “Rocking Chair Loges” in the rear orchestra also reduced capacity. But in the 50s it was the most comfortable movie seat in Fresno. Another remodel in the 60s expanded the lobby and snack bar and finally added rest rooms on the main floor.