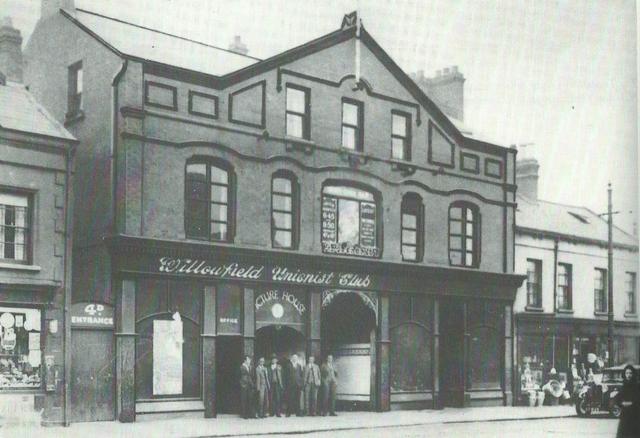 The Willowfield Picture House has the distinction of being the only cinema in Belfast founded and controlled by a political party. It was opened on 13th December 1915 by the Ulster Unionist Party and also served as the local Unionist Club. It was known locally as the ‘Winkie’, and formally renamed Rex Cinema by 1969 in a futile attempt to revive its fortunes. After closure in 1973 it was briefly used for showing Asian films to Belfast’s Pakistani community. The cinema was near the junction with Cherryville Street. It was later demolished and replaced by a row of single-storey shops and new houses.

The Willowfield Picture House opened on 13th December 1915. It was owned by the Willowfield Unionist Club (a constitutent part of the Ulster Unionist Party). By 1969 the cinema (as distinct from the building) had changed hands; it was now being run by Rex Cinema (Belfast) Ltd, who changed its name to the Rex. It continued to use the Rex name during the brief period when it showed Asian films. (Rex Cinemas (Belfast) Ltd also owned the Park Cinema, Belfast in its final years; Rex Cinemas was a sister company of Carter Cinemas Ltd.)