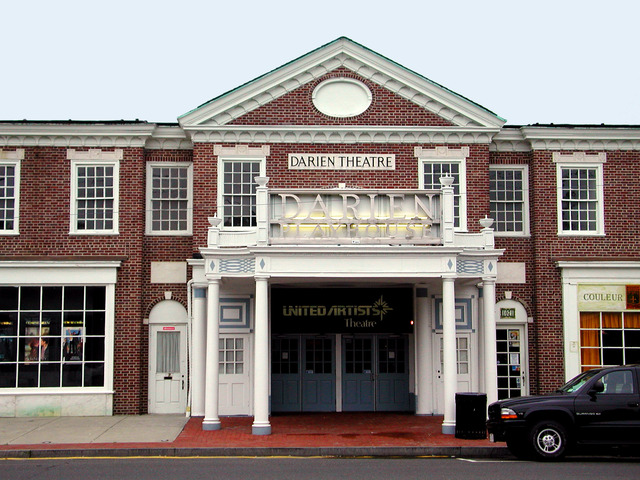 The Darien Theatre was built in 1949. It had a large auditorium with a raised stadium area in the back. It was twinned in the 70’s by United Artists Theatres. In the early 2000’s, UA left and an independent took over. The stadium area was walled off, gutted and converted into retail space along with the lobby A new lobby was built alongside the auditorium, and the orchestra section operated as a twin with about 150 seats on each side.

The owner of the building announced plans to close the theater and convert the auditorium into apartments. The theater closed due to the coronavirus pandemic, and gutting has commenced to perform the apartment conversion.

Seating capacity is shortly going to be reduced to about 300 with the addition of retail space. More retail space is needed to ensure the financial viability of the building.

Who runs this as a movie theater right now ?
Is this a United Artist/Regal operation or is it closed
and renovating for a new owner?

It’s an independent owner. he has run the theatre for about a year so far, but wants to renovate it to reduce the size of the auditorium and add retail space.

Is this a first run commercial venue or arty house policy?
Roger my email address is

The Darien Playhouse is a first run theatre… when re-opened, the entrance will be in the back of the theatre, and the lobby on the side… the seating in both theatres will begin where the carpet used to cross the floor seats half way down, so you will always be sitting on top of the screen, and the beloved balcony will be only a memory… But we’ll have to wait and see how it turns out.

Things are on the move in Darien. Here are excerpts from a New York Times story of 8/18/04, followed by a link to the entire article.

A full-service Elizabeth Arden Red Door Spa and an Ann Taylor Loft have leased space in the Darien Playhouse movie theater, a prime spot in the small downtown here.

Arthur Collins Sr., a developer of upscale office and housing complexes along the Eastern Seaboard, and Thomas E. Golden, president of the Thomas E. Golden Realty Company in Darien, are redeveloping the 21,500-square-foot theater building, built in 1926. Closed for seven years in the 1980’s, it was purchased by United Artists and reopened as a two-screen theater, but closed again before the two men took it over. Mr. Collins said, “We had to find a way to save it for the town, but movie rents are barely a break-even, so we had to get other income.”

While Mr. Collins and Mr. Golden have completely gutted the interior, they saved the red-brick colonial facade in compliance with the town’s wish. “We are a charming New England town, and we don’t want to lose that character,” Ms. Klein said.
By halving the two theaters' capacity, to 160 seats each, and adding 1,500 square feet to each side of the building, the developers made room for three new tenants. The third is a high-end linen shop, Sweet Dreams, which took 1,500 square feet on the ground floor facing the street.

The white-pillared theater entrance and lobby will be taken over by Ann Taylor, with a store that covers 6,500 square feet; moviegoers will now enter the theater at the back of the building. The marquee will remain, bearing the name Playhouse Square. The two stores and the theater are expected to open around Thanksgiving, Mr. Collins said.

Peter Vivien, a restorer, owner and operator of vintage theaters in New Jersey, will operate the theater on a 30-year lease. His plans for the interior include a swagged Austrian show curtain and pastel upholstery.

that photo isnt of the theatre. the theatre is now located in the back of the building