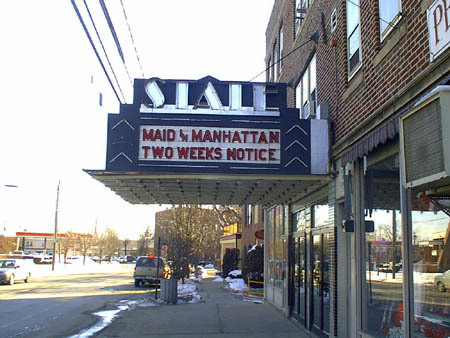 The Springdale Theatre opened in 1927 and has operated continuously as a moviehouse ever since. It was a first run theatre and retained its large main screen, with a second screen now operating on its former stage area. It was closed on September 6, 2018.

Also, that date up top that says it opened in 1927 is the date it started showing movies, but it was around as a legitimate theatre before that.

The plan to show art films has been abandoned along with plans for two more screens. The State Cinema is – and will remain – a twin showing sub-run.

First listed in the Stamford City Directory in 1928 as the Springdale Theatre on 986 Hope Street. Becomes the State in 1932 showing moving pictures and vaudeville. Not listed in 1958. At 990 Hope in 1964.

I finally went by this theatre on the way to a documentary showing at the Avon. I like how the 2nd theatre is behind the main in the stagehouse, with a stadium slant. Reminds me of the Latchis.

Anyway, to the left and down the ramp, it’s rope off and the lower walls up to about 10 feet are taken apart and are vacant with blue tarps. I inquired inside and it looks like no additional screens will ever be built. There are already apartments above the lobby and these lower vacancies will be new basement apartments. Strange, but probably more lucrative.

The State Theatre is a real gem. They are now showing first run films. I saw Monuments Men in the original 500 seat theater. Seats are very comfortable. They were replaced in 19898. The slope of the floor is very good. So you get a good view from any seat. Movies are now all digital. As they switched from 35MM film stock about a year ago. A beautiful mural of blue sky and clouds spreads across the entire ceiling. in 1998 the theatre underwent a $250,000.00 top to bottom renovation. A 2nd theatre with 100 stadium seats was added in 2001. The lobby is long and adorned with mini chandlers and framed mirrors. The ticket booth is painted yellow and authentic. Before you turn right or left to enter either theatre. There is a old carbon arc projector on display. Which was used when the theatre opened in 1927 up thru the mid 1990’s.

The parking lot behind the theater is very small. As when the theatre was built. Most people walked from nearby houses.

Parking in other private lots near the theatre WILL GET YOU TOWED! So park in the CVS complex 1.5 blocks from the theatre and take a brisk walk back to the theatre!

Prices a very reasonable $10.00. $9.00 matinee. $4.00 all seats on Tuesday. So get there early as it gets packed! The State Cinema is a real Cinema treasure! So pass by the multi-plex and make this cinema your go to movie palace!

THE STATE IS CLOSING: http://digital.olivesoftware.com/Olive/ODN/TheAdvocate/shared/ShowArticle.aspx?doc=TSA%2F2018%2F06%2F10&entity=Ar00102&sk=C0B3C140&mode=text

FADE TO BLACK Since opening in 1927, the landmark movie theater in Springdale has fought hard to keep up with the competition, but after years of lost revenue, will soon show its last film. By Barry Lytton

Picture State Cinema owner Richard Freedman talks about closing the theater in one of the two screening rooms. At right: A poster that hangs in Freedman’s office showing State Cinema ticket prices from the 1970s. Below left: A Stamford Advocate newspaper article on the cinema’s opening in 1927. Below right: An Advocate article from 1988 on Freedman’s father, Joel, investing $300,000 to renovate the theater.

Picture STAMFORD — The storied brick movie house on Hope Street was never meant to be — its history a tale of reinvention and adaptation in fiscal crises as the village around it morphed into a part of the city, and its clientele shifted from men in bowler hats to those in fedoras to children sneaking an impromptu matinee.

The State Cinema has screened thousands of movies since its projector first flickered light through nitrate film in 1927 for a much-awaited screening of “Tell it to the Marines” after a failed launch as a vaudeville theater. Its last film, now through a digital projector, will hit screens this Labor Day weekend, and the cinema will shutter due to another — this time fatal — dip below the bottom line.

The Freedman family, owners of the cinema since the 1970s and operators since 1987, are shutting down the cinema’s two screens after nearly a decade of annual losses. The past four years have been even deeper in the red, said Richard Freedman, manager of the family’s real estate firm, Garden Homes Management.

“It started to lose a lot of money, and not for a short period of time,” Freedman said. “At a certain point, you start to ask, ‘How long will it be? Can we sustain this?’ ”

The answer, he said, was reached with great difficulty this spring.

In the early days of cinema when the silent art form was just turning to feature narratives, films were often parts of vaudeville shows, which remained a big night-out draw. A slow shift to longer films started taking a toll on old vaudeville, and poached its talent such as Charlie Chaplin, around World War I.

“In the grand sweep of time since it opened, it had only a brief window of unadulterated success, from 1988 to 1995.” Richard Freedman, owner of State Cinema

But the shows still drew crowds, and a Springdale vaudeville theater seemed a prudent investment, until Al Jolson, in “The Jazz Singer,” broke into song — the same year the theater opened its doors.

That film, the first “talkie” couldn’t have come at a worse time for the founders of the theater, led by local builder Ernest Kiesel, according to city land records. The building, with seating for 1,000 and bowling alleys in the basement, was worth between $110,000 and $140,000 — about $1.7 million now, according to “Springdale Remembered,” a book chronicling the neighborhood’s history.

“Within two years, the owners of the building … were in financial trouble,” author Rosemary Burns wrote. “The theater was ordered to be sold in order to satisfy creditors. The business was reorganized, and ‘the new owners hoped for profit by installing a new projector for talking pictures.’ ”

Called the “Springdale” or “Sterling” Theatre — depending on which historical account you read — the place was a hit with its massive painted ceiling depicting a cloudy day framed by gold-leaf paint. It had a good run until again falling prey to creditors. It was purchased years later, records show, and its name changed to the State Theatre.

In the 1950s, the State was closed for several years and the bowling alley became an ice rink, until that also closed. It is unclear what prompted the closures or when the theater reopened for good. In the ensuing decades, it bounced between owners and operators, each trying to turn a profit to no avail.

By the 1970s, the cinema was open but struggling. It was always a second-run theater, known for lower prices than downtown’s first screenings, but attendance waned and the building fell into disrepair.

Freedman’s father, Joel, bought the building as an investment in 1976. For the next 10 years, the cinema was operated by a projectionist, who was Joel’s tenant until 1987 when “he up and left, leaving us holding the bag,” Freedman said.

Joel Freedman “was faced with tearing the theater down or drastically upgrading its facilities,” according to a 1988 edition of the Stamford Advocate.

He chose the latter, sinking $300,000 into the then one-screen movie house.

“You could call it a labor of love, I suppose,” Joel Freedman told the paper at the time. “Anyway, that’s how I wound up in the movie business.”

The business worked for the Freedmans for the next seven years, Richard said.

“In the grand sweep of time since it opened, it had only a brief window of unadulterated success, from 1988 to 1995,” Freedman said. “That period began after my father’s renovations and ended when the Landmark expanded from three screens to nine screens. … The Majestic, six more screens, opened in 1997. That was also a major blow.”

Again facing a setback, the family added a second screen, which was tricky because neither Joel nor Richard would ever split the main amphitheater with its historic ceiling.

“That’s just my thing and my father’s thing,” Richard said. “We just don’t want to see the main auditorium cut up.”

The second theater, tucked behind the main screen on what was the vaudeville stage, opened in 2004. The second screen gave the business a boost, and a year later, lengthy court fights came to fruition for Freedman, who successfully won the right to have a first-run theater.

He hoped that would turn things around.

But then came another major investment, a switch to digital projection propelled by distributors who didn’t want to pay for film prints.

In 2011, Freedman converted the theater to digital and then renovated the lobby in 2015.

But the improvements didn’t stave off the inevitable, and 2017 marked a 25-year-low in national movie attendance.

And the cinema, far from downtown, with little parking and only two screens, starting losing more money than the Freedmans could sustain.

So Labor Day weekend, the State’s main projector will dim for the final time after a screening of “Replicas,” a Keanu Reeves vehicle about a scientist obsessed with bringing family members back to life.

The Freedman real-estate firm is now hearing proposals for the space, but one thing is non-negotiable. The family will only entertain proposals that maintain the historic integrity of the main auditorium, he said.

Freedman’s firm, which deals mostly in housing, will not put in apartments.

Freedman would prefer it remain a movie theater, but doubts a new owner could make it work.

“It started to lose a lot of money, and not for a short period of time. At a certain point, you start to ask, ‘How long will it be?’ ” Richard Freedman

See this article in the e-Edition Here

The theater closed after Labor Day 2018: