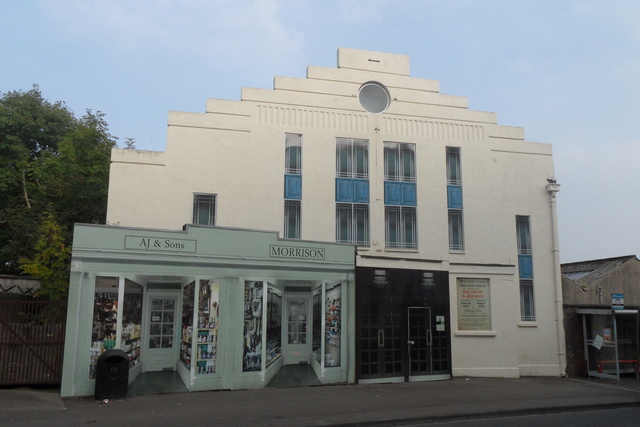 In Ballymoney, County Antrim two cinemas, the Palladium Cinema and the 300-seat Cinema, are listed in the 1940 and 1966 Kine Year Books. The Palladium Cinema was opened in 1937. It was closed in May 1969 with Charlton Heston in “Planet of the Apes”.

My scanned photographs were taken in September 2008, when the building was derelict and in very poor shape. By October 2013, when my other photographs were taken, it had at least been securely boarded up across the frontage, and the site was being offered for sale. The auditorium has since been demolished.

On a visit in September 2014 I was delighted to see that the frontage had been tidied up and painted to resemble the cinema as shown in an archive photograph helpfully displayed together with other heritage information (yes, the ‘windows’ are merely painted on!).

That information confirms this was the Palladium. It opened in 1937 and closed in May 1969, the final film being “Planet of the Apes”, starring Charlton Heston.