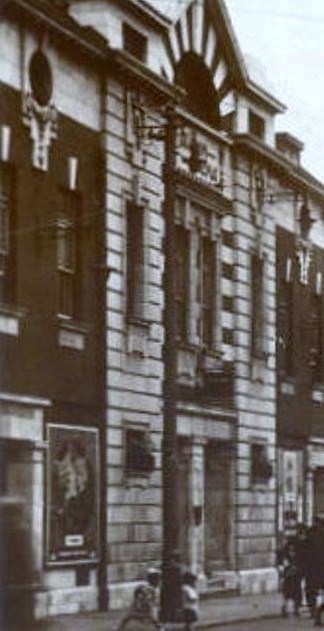 The Albion Cinema was designed by architect William Stockdale and was built of red brick and had a white glazed Hathernware detailing on the façade. The foundation stone was laid in 1913 and the cinema opened on 2nd February 1914. Seating in the auditorium was in stalls and circle levels. The proscenium was 28 feet wide and the stage 18 feet deep. There were also dressing rooms provided for artistes.

KYB 1931 has the owners as “Albion Cinema Ltd” and RCA sound has been installed. The first ‘talkie screened was “Mother’s Boy” starring Morton Downey on 16th September 1929.

KYB 1947 repeats the information but drops the capacity to 1,070 seats.

KYB 1954 has the capacity as 1,034 seats (possibly a row, or two, lost due to a wide-screen installation). The first CinemaScope film screened at the Albion Cinema was Doris Day in “Lucky Me” on 27th December 1954.

The Albion Cinema was closed on 5th March 1976.

A block of flats known as Norfolk Court was built on the site in the late-1970’s.

The Albion Assembly Rooms were on Norfolk Street. The hall was in “an addition to the Albion Hotel” built in the form of three ground-floor shops (with basements) over all of which was a hall 84ft6 long, 36ft wide and ~30ft high. (The last figure seems large, but is probably quoted for a beamed ceiling rising to an apex.)

It means that the Albion Assembly Rooms are another venue for film exhibition in North Shields and, from the KYB entries, was in business in 1914 but closed by 1931.

My father lived in North Shields as a boy and he thought that the Albion was the best cinema in the town. Although the Princes was a later and larger cinema, he did not rate it as highly. The Albion was always an independent cinema, although for many years, it usually played the same program as the ABC New Coliseum, Whitley Bay, and after that closed, the ABC, South Shields. Get Carter (the original version with Michael Caine) was a huge success here, running for four weeks.