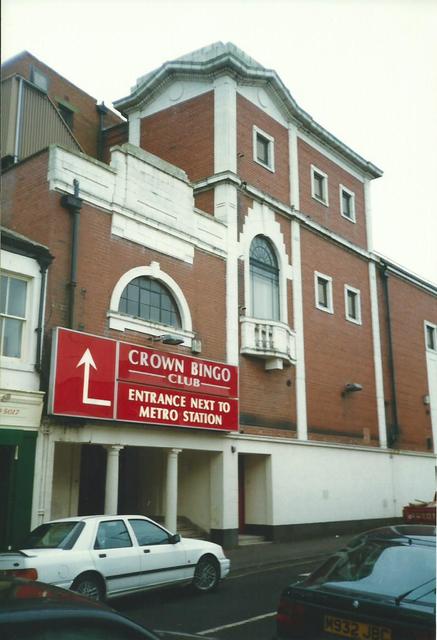 In North Shields, on Tyneside in the North East of England, the Prince’s Theatre opened on 7th October 1929 with “Movietone Follies”. The architect’s were Dixon & Bell, and the cinema had 1,750 seats.

Taken over in June 1931 by Gaumont/PCT it was renamed Prince’s Cinema. It was closed around November 1949 for repairs to war damage; when it reopened, on 16th October 1950, it was renamed Gaumont.

Taken over by an independent on 5th July 1970, the Prince’s name was reinstated. Classic Cinemas took over on 2nd January 1972 and the cinema took that circuit name.

The Classic Cinema closed on 18th September 1976. The stalls were converted to bingo. The former circle was subsequently sub-divided into two screens, Crown 1 & 2, which opened on 1st June 1977 (with 158 seats in Crown 1 and 107 in Crown 2), operated by the Noble Organisation. These closed in July 1982.

Crown Bingo continues in the stalls.

The Prince’s was always a full-time cinema. As mentioned, it opened on 7 October 1929, the opening film being “Movietone Follies”. The weekly programmes for the rest of the month being “The Trial of Mary Dugan”, “The Singing Fool”, and “Broadway Melody”. When Gaumont acquired the Princes, it then took over the Gaumont release from their existing cinema, The Boro which then took alternative programmes. An oddity of programming in the thirties and forties was that the main feature would play twice in the evening and also once in the afternoon supported for the afternoon only by a revival of an older film. I have not come across this elsewhere – other northeast Gaumont cinemas played conventional double bills. The stage facilities saw very occsional use in the fifties and sixties when the theatre was hired out to the local Amateur Operatic Society, which despite the name staged musicals.