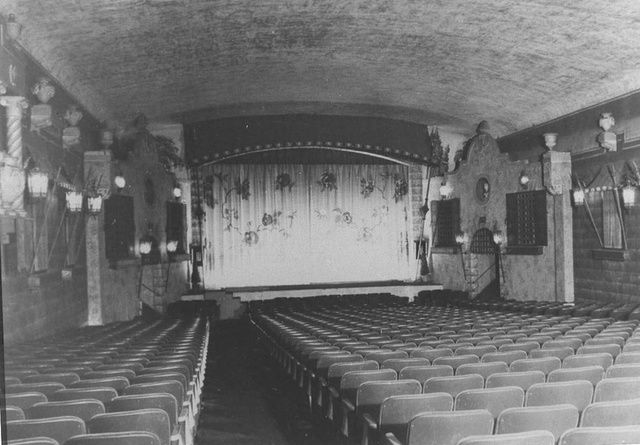 The Sherman Theatre was opened September 15, 1918. By 1941 it was operated by Warner Bros. Circuit Management Corp. It was closed on December 17, 1953 with Marilyn Maxwell in “Paris Model” & John Ireland in “Combat Squad”. It was demolished in 1954.

Opened in September 1918 on the site of what was previously “The Duck,” a famous docked boat, destroyed by fire. Opening attraction was Theda Bara in “Salome.” Seated 1,000, and had a stage for live performances, too. Originally managed by J. Elmer Redelle, a former Shubert manager who left about a year later to manage the Victory in Dayton. Victor Cohn took over for him, but when Camp Sherman closed after the War, business went downhill. C. A. Smith, who owned the Star and the Queen eventually took it over. William J. Cowdrey was the organist there in the 1920s. The Paramount film “Huckleberry Finn” had its world premiere there in 1920.

On the cusp of new improvements, the future of the theater was doomed starting in 1947 when the town started plans to practice eminent domain to take over what were called “old canal” land upon which the theater and other buildings were built. The theater closed in December 1954, at which time it was raised and Water St., on which the side of the theater sat, was expanded to four lanes.

Jack Theakston’s comment notes that the side of the Sherman Theatre was along Water Street, so the address Paint Street and Water Street should fetch the right location on Google Maps.

This opened on September 15th, 1918. Grand opening ad in the photo section.