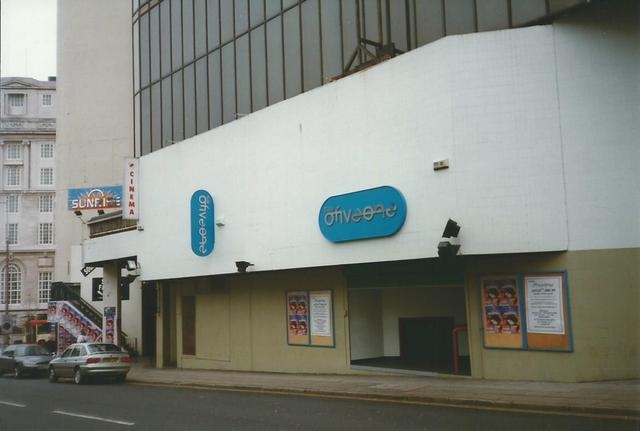 In Liverpool city centre, at the junction of Brownlow Hill and Mount Pleasant, the three screen (215, 130 and 140 seats) Studios 1, 2, 3 were opened by the Star Cinemas group as part of a £1.4m entertainment centre. The otherwise plain exterior featured a tall tower at the junction of the two roads. The auditoriums were very basic, without screen curtains, stage or proscenium, but with bold colour schemes and comfortable seating. Projection was provided by Westar 7000s, with Westrex sound and Towers long running system. The opening programmes, on 9th October 1975, were “Confessions of a Window Cleaner” starring Robin Askwith, and Mel Brooks “Blazing Saddles”, “Emmanuelle” starring Sylvia Kristel, and “Secrets of a Door-to-Door Salesman” with Brendan Price and Karen Boyes; and kung-fu biopic “The Legend of Bruce Lee”. Struggling to obtain leading first run films, the Studios 1, 2, 3 soon increased their ‘X’ certificate screenings.

In February 1985 the lease was acquired by Dinoheath Ltd, owned by Anne Robertson Devlin, Rik Prowse and Robin Price. They undertook a major refurbishment, changed the name to Ritz Cinema and programmed re-runs of successful general release films coupled with ‘art house’, limited release, attractions. The Ritz Cinema opened on 11th February 1985 with “The Missionary” starring Michael Palin, and “Privates on Parade”, with Michael Elphick; Jeremy Irons in “Swann in Love”; and adult double bill “The World is Full of Married Men” and “The Story of Linda”. Dinoheath Ltd. struggled on until March 1988, when the lease was acquired by two employees, T. Cartwright, the chief projectionist, and Mrs J. Johnstone, who formed Run Trend Ltd. They invested £8,000 in redecorating and reseating, but only lasted four months, with the lease terminating, followed by closure in August 1988.

In 1991 the cinemas were taken over by London-based Robins Cinemas, attracted by the large student population and the outcry that followed closure. Following further refurbishment the cinemas reopened, now called 051 (as the wider entertainment centre was by then called - ‘051’ was the telephone dialling prefix for Liverpool) on 15th October 1993 with Ken Loach’s “Raining Stones”, Spanish satire “Accion Mutante” and cult favourite “Reservoir Dogs”. But the supposedly ‘film-starved’ movie buffs failed to materialise, losses continued, and Robins Cinemas withdrew just two years later, in October 1995. An agreement between staff and the landlord saw the cinema reopening, rent free, in November 1995. But this, too, was very short-lived, and the cinemas closed for good on 25th September 1997.

In February 1999, when my photographs were taken, the centre was open for non-film activities - with the small “Robins Cinema” sign a reminder of that part of its cinematic past.