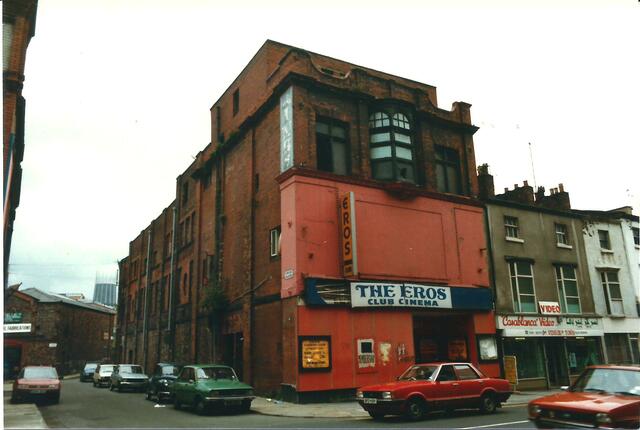 Located on London Road in the city centre, a few yards east from the now demolished Odeon (ex Paramount). The 580-seat Electra Palace Theatre was opened on 30th May 1911. It was designed by architectural firm J.L. Langford & Slater. In the early-1920’s it was re-named London Road Picture House and was soon renamed Alhambra Cinema.

In 1932 it was taken over by the Regent Enterprises Ltd. chain and was re-modelled to the plans of architectural firm Gray & Evans who added a 290-seat balcony to increase the seating capacity to 820. It re-opened as the King’s Picture House on 13th October 1932 with George Arlis in “The Silent Voice”. It was equipped with a British Talking Pictures(BTP) sound system. In March 1928 it was taken over by the Southan Morris chain of S.M. Super Cinemas. In October 1954 they were taken over by the Newcastle based Essoldo chain. It was equipped with CinemaScope and the first film to be screened in that process was Spencer Tracy in “Broken Lance”. The Essoldo chain closed the King’s Picture House on 1st April 1972 with John Wayne in “Chisum” & Efrem Zimbalist Jr. in “Cosa Nostra, Arch Enemy of the FBI”.

On 4th April 1972 it re-opened as the Curzon Cinema Club, showing uncensored sex films. The Tatler Cinema Club moved from its Church Street location into this cinema and it was re-named Tatler Cinema Club from 22nd December 1972 until 18th November 1979, still screening adult movies. Tatler Cinema Clubs were operated by the London based Classic Cinemas chain and this Tatler was re-named Classic Cinema and it played double bills of (X) Certificate films until 24th August 1980. The seating capacity had been reduced to 327. It then went back to uncensored sex films and was re-named Eros Cinema Club which operated until August 1981 when it was closed down by Liverpool City Council who objected to the type of films being screened. The building stood derelict for several years until it was eventually demolished and retail has now been built on the site.