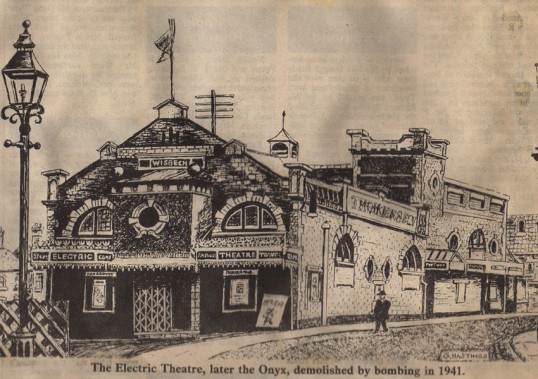 Located in Wisbech, Cambridgeshire. The first purpose built cinema in Wisbech was the forerunner of many more from the cinema magnate Frederick Holmes Cooper (1866-1939). His slogan was “The World Before Your Eyes”. The name changed twice, to Regent Cinema and from c.1935 to Onyx Cinema, by then no longer a Cooper cinema. It had a 25 feet deep stage, which was used for variety acts in the 1930’s, and there were three dressing rooms.

Sadly in 1941 a German bomb fell outside. Although the projection equipment still worked, building restrictions forced not the repair, but the demolition of the Onyx Cinema, and the land was subsequently used for a car park. The most controversial film shown here was “Marriage Forbidden” an American film about VD, which was recommended by the British Social Hygiene Council.