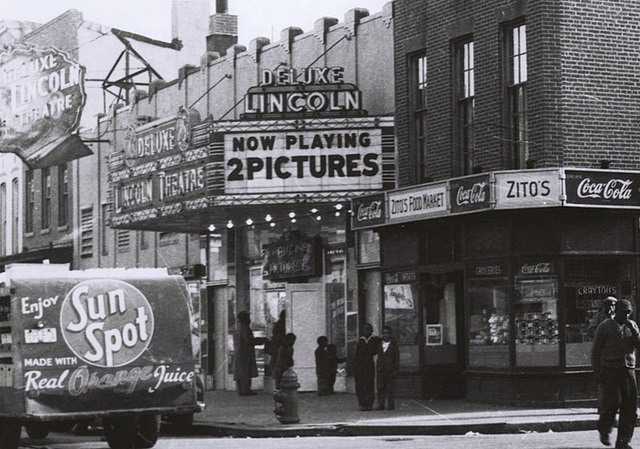 Built on the site of the Palace Theatre (aka Lincoln Theatre 1907-1912) which was the first African-American theatre to operate in Maryland. The New Lincoln Theatre was built in 1915, and opened on August 28, 1916 as an African-American theatre with ‘real colored vaudeville’. The seating capacity was 285, and films were shown as part of the programing. It was so successful that the same management took over the nearby American Theatre at 941 Pennsylvania Avenue in 1925 and renamed it Lincoln Number Two Theatre.

The Lincoln Theatre was enlarged to 400 seats, and 1928 was offering vaudeville on Mondays & Saturdays, with movies on the other days of the week. In 1938 it was enlarged again, this time to 870 seats, and the façade was remodelled in an Art Deco style. The neon sign was shaped in a figure of President Lincoln’s head. By this time the seating was divided by a center aisle, and white people sat on one side and colored people on the other side. Famous artistes who appeared on its stage were Cab Calloway, Ethel Waters, Bessie Smith and Stepin Fetchit.

The Lincoln Theatre was closed and demolished in 1971. Housing was built on the site.

ANOTHER NAME WAS DELUXE LINCOLN THEATRE