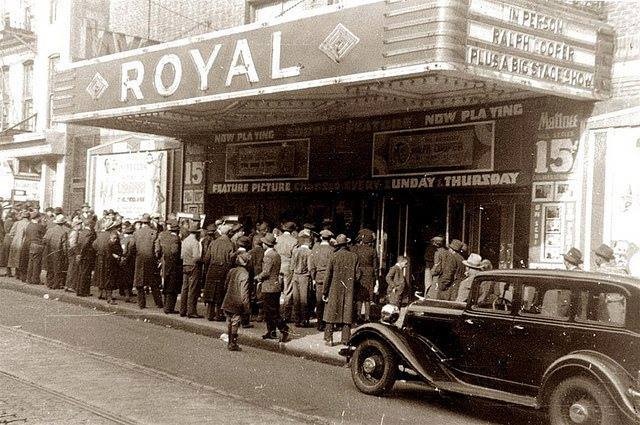 Opened as the 1,349-seat Douglass Theatre on February 15, 1922. It was renamed Royal Theatre from November 30, 1925 with vaudeville & movies, catering for an African-American audience. It was demolished in 1971.

When you look back at a busy Pennsylvania Avenue in the late-1960’s the Royal Theatre was operating as a movie theatre and just behind it the New Carver Theatre (a.k.a. Diane Theatre) as well. Further up the block the Regent Theatre stood. The entire area has been razed and nothing survives today as far as movie theatres.

The Royal Theater is now represented by an insult of a monstrosity that sits on a corner that is home to a pile of bricks with a marquee…none of which is indicative of the rich and very royal history that is part of the legacy of an institution that once was a determinig factor of an artist’s career success as well as a major venue for well known musicians, singers and vaudeville acts ie. tap dancer, singer, performers HINES, HINES and DAD (Gregory and maurice Hines, The Chick Webb orchestra with Ella Fitzgergerald, Jackie Wilson,James Brown Sam & Dave, The Motown Revue with the Temptations and The Miracles…a major venue on
the “Chittlin Circuit”..if you could make it through the Royal…generally your next step would be har;em’s Apollo Theater and then one might be on his/her way to the BIG TIME.

The Royal Theater is one of Baltimore City’s most famous treasures..yet the importance and emphasis of it’s historical legacy has been minimized and completely discounted in the hands of thoses whyo lack thye ability to understand the impact of preserving history in it’s proper form.

A land mark who in time will be forgotten because of of the lack of preservation skills.

Adjacent to the edifice that represents nothing of the past on the northwest corner of Pennsylvania Avenue and Lafayette Avenue is a statue of Billie Holiday loaded with misinformation..

Royal Theater. First opened in 1922, as the black-owned Douglass Theater, the 1,000-seat theater was sold to whites, and its name was changed to the Royal Theater. It became one on a circuit of five theaters for black entertainment in big cities. Its sister theaters were the Apollo in Harlem, New York, Howard in Washington, D.C., Regal in Chicago and Earl in Philadelphia. All of the biggest stars in black entertainment, jazz and blues performed at the Royal including singer Louis Jordan and his band, The Tympany Five; Duke Ellington; Nat King Cole; Count Basie and the Sweethearts of Rhythm (a 40-piece, all female band). It was at the Royal that Ethel Waters debuted, Pearl Bailey sang in a chorus line and Louis Armstrong and Fats Waller worked as accompanists. The city’s first talking motion picture was shown at the Royal: a 1929 motion picture called Scar of Shame, featuring a black cast.

Other popular Baltimore clubs during this era included The Sphinx, Gamby’s and The Regent. Even larger than the Royal, The Regent, which could seat up to 2,000, was a vaudeville and movie house, famous for musical and dance revues with chorus lines stretching across the stage and featuring big bands of 1920s and 30s.

As middle class flight from Old West Baltimore continued during the 1960s and 1970s, the community began a period of decline that accelerated after The Avenue was attacked during the 1960s civil rights riots. In 1971, the Royal Theater was demolished. Before it closed in 1970, Nat King Cole, the Platters, Temptations and Supremes had all performed there.

The new Royal Theater Marquis Monument is phrase one of an ongoing series of projects that the Pennsylvania [PARC] Avenue Redevelopment Collorabrative is successfully leading. Workingly closely with the Mayor’s Office of the City of Baltimore, the Upton Planning Committee, the 14 community groups that make up PARC including the Pennsylvania Avenue Committee [PAC], our chair George Gilliam and his late wife, Stephanie Gilliam worked over seven years to erect the new and quite beautiful Royal Theater Monument.

It was dedicated by Baltimore Mayor Martin O'Malley and Mr. Gilliam on Monday, April 5, 2004. The dedication ceremony drew over 200 people on a chilly April morning. City planners, residents, visitors, and tourists aLL emphatically agree that the new Royal Theater is a very nice reminder to the past history of Historic Penn Avenue.

On June 9, 2004, PARC will host a planning meeting to improve and restore the Billie Holiday Statue and Park that sits directly across from the Royal Theater.

It is always less-than-interesting to hear/read “negative” comments when they come from individuals who have done nothing to improve anything not even their shortsightness in appreciating the efforts of others.

Stephanie Gilliam was murdered on December 28, 2003, at age 50, after spending the last six-seven years of her life to design and create the Royal Theater Monument.

The great musical legend William “Smokey” Robinson came to Baltimore and performed in October 2002 to assist in the fundraising and public awareness campaign to build the monument.

At the dedication Smokey became the first legend to have his image signature and hand print inscribed on the Royal Theater Monument Wall of Fame. A memorial to Stephanie Gilliam was also place there.

Additionally, there is a music recording inplanted in the monument which plays the music of many of the Royal Theater entertainers.

On September 24-25, 2004 Smokey will again return to Baltimore and perform as part of the “Royal Theater Reunion Weekend”.

For the last nine years, PAC has held the city’s largest parade in the African American Community in Baltimore. Thousands of people attend. It is called the Fathers Day Cadillac Parade & Royal Theater Music Festival. This year the festival had to be moved the September 24-25 as the Baltimore African American Heritage Festival is being held in Camden Yards on FATHERS' Day weekend, June 18-20, 2004.

For additional information please contact me, Louis C. Fields, President of the Baltimore Black Heritage Tours at email: or by phone at (410) 783-5469.

Here is a 1930 photo. The theater was giving away coal, presumably in the winter time. Note the picture of a very young Satchmo:
http://tinyurl.com/o9n5u

The existence of this theater and a mock up of it played a pivotal part in the 1999 Adrien Brody film “Liberty Heights”. It was shown as the site for a late 50’s James Brown concert that two of the film’s main characters attended.

A rather nice backlot, neon marquee was rebuilt to presumably replicate the original exterior.

The Diane/New Carver/Carver was not “behind” the Royal; it was a block north, at 1429 Pennsylvania.

I got to see one show at the Royal, and it was a great one, with Otis Redding as the headliner. This was in either the early spring or fall of 1967. We sat through the live show, then sone non-descript jungle movie, then the entire Redding show again.

More photos on below link.

Article with a photo of the Royal among others.

The Royalettes girl group of the 60’s who had several hits, named themselves after this theater.