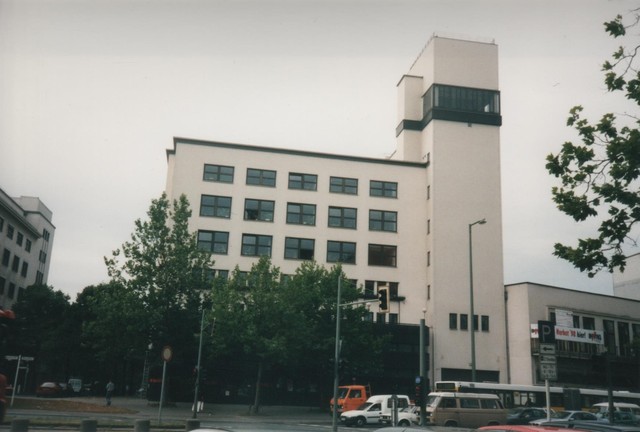 Located in the west Berlin district of Charlottenburg at the intersection of Heerstrasse/Pommernallee and Theodor-Heuss-Platz. The new cinema on the Reichskanzlerplatz (now known as Theaodor-Heuss-Platz) was opened in 1930 as the Oberon Filmtheater. It was designed in an Art Deco style by architects Heinrich Straumer and Oskar Kaufmann. The entrance is on the corner of Pommernallee. Alterations were carried out in 1934 to the plans of architect Gustav Neustein, and again in 1936/1937 to the plans of architect Paul Rettig. A feature of the building on its Heerstrasse façade is a tall tower on the right-hand side. Seating in the auditorium was provided for 746, with 630 on the main orchestra floor, 84 in a small balcony and 32 in loge boxes.

In 1934 it was re-named Westpalast. In 1947 it found itself in what had become the British Sector of the divided city of Berlin, and it was taken over by the British Army for use by the occupying troops and re-named Naafi-Club Cinema.

In 1950, it reverted back to civilian use and was re-named Internationales Kinovariete Oberon, presenting a programme of films and variety shows, which continued for many years.

When seen in August 1998, the cinema was closed and ‘mothballed’ awaiting a new use. It has since re-opened as the Berliner Kabarett-Theater.