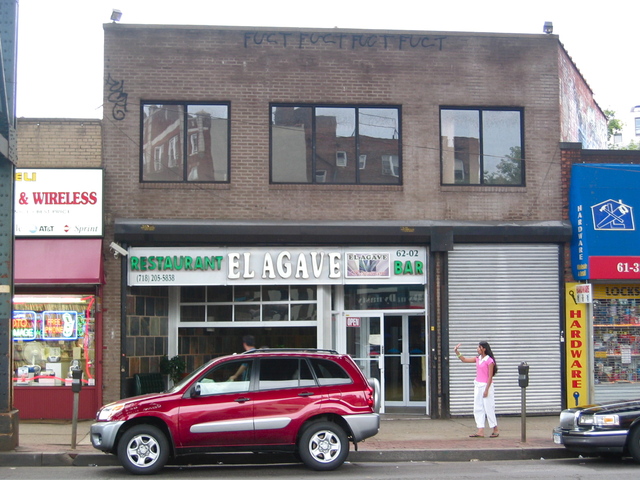 I spent many Saturday afternoons in the Delux Theater watching 2nd & 3rd run double features from 1958-64 with the bevy of Woodsiders viewing the matinee. Does anyone remember the varied colored flyers that would be distributed throughout the neighborhood the week prior to the show? When one went to the matinee there would be one colored flyer displayed in the ticket both, and if you were fortunate enough to have had that color flyer you would gain free entrance to the screening that afternoon.

Took a quick photo of the old place just a couple of weekends ago. I grew up in Elmhurst in the 70’s and had an Aunt who lived in Woodside. I also remember taking the 7 train to the 61st Street station located above the theater for transfers to the LIRR station that ran in a trench below street level. I have a vague recollection that there was a movie theater here, but I never gave it much notice. The building that stands there now doesn’t look anything like a movie theater, and I’m not convinced it is the original structure at all. However, the Mexican restaurant that occupies the spot seems to follow the old footprint of the theater. I walked inside and could envision the narrow lobby going back off the street at a fairly obvious angle (which is noticeable if you look at the exposed interior wall on the left in the photo below). The restaurant then opens up on the left side and is quite roomy with a dance floor towards the rear that opens up yet again towards the street. If you can imagine a long and wide corridor (the width of the entrance you see in the photo) and then a big, open “L” shaped space off to the left of the corridor about 20 or so feet from the entrance… that’s the basic layout.

[/url=http://i18.photobucket.com/albums/b110/GuanoReturns/Queens%20Movie%20Theaters/Deluxe%20Theater%20Woodside/IMG_0684.jpg]Here’s a new link[/url] to the recent photo I posted in September. The old one no longer works.

This 1968 childrens matinee was originally released in 1954
View link

Never realized the above comment was broken… so here’s a fix.

Here’s a new link to the recent photo I posted in September. The old one no longer works.

Hey Warren…. When I visited the restaurant I photographed on the site of the old Deluxe back in September, 2005, the interior was layed out in an L formation, much as I suspect the theater might have been. Perhaps a “flag” shape is more accurate, with a narrow corridor leading back from the street and then opening up on the left into a larger and deeper space. I believe this was most of the interior (if not all) of the old Deluxe. I could be mistaken. While the address ceratinly matches that of the old theater, the facade of the building is utterly non-descript and betrays no signs of a former theater – other than the layout I just described.

Next time you’re in that area, try taking a look at the building from the LIRR platform – which might afford a closer look, if not as high an overview as the IRT platform does. Due to the steep grade of the streets running behind the old theater, what is a two story structure on Roosevelt Avenue is actually quite low-lying on the back end. The LIRR platform is practically at street-level behind the theater block. My train passes through Woodside Station every day on the way to and from work.

It looks like the space is now a Chinese restaurant called Top of the World Buffet.