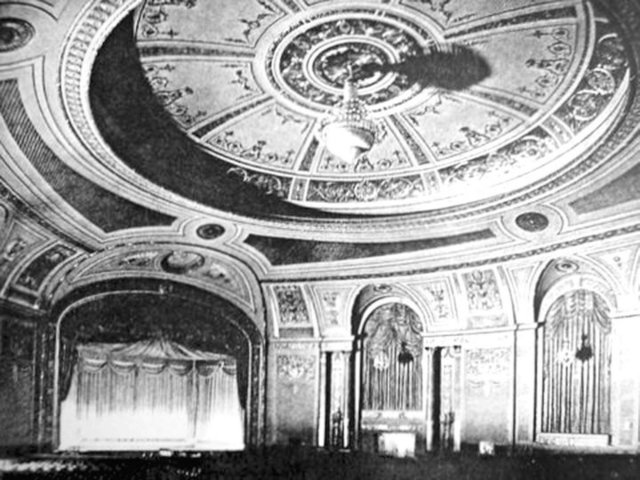 Though technically in the Woodside section of Queens, the theatre was situated so close to the shopping district of adjacent Sunnyside that it was given that name. It was one of three Queens theatres built by the Grob & Knobel circuit with Herbert J. Krapp as architect (the others being the Jackson Theatre and Boulevard Theatre, both in Jackson Heights).

The Sunnyside Theatre was the most luxurious of the three and took up an entire block, with the entrance on bustling Roosevelt Avenue, under the shadow of the elevated Manhattan-to-Flushing subway line. The auditorium was rather unique, with all 2,046 seats on the ground floor, which was 110 feet wide and 142 feet long from last row to stage, with a pitch of seven feet from rear to front. There were five sections of seats, divided by four aisles. The stage was 98 feet wide across the wings and 26 feet deep. The proscenium opening was 45 feet wide and 25 feet high. The highly ornamented ceiling, which rose to a height of 55 feet, had a cove-lighted dome in the center, hanging from which was a huge crystal chandelier with special lighting effects. Twelve smaller crystal chandeliers were hung along the two side walls and rear of the auditorium. The walls were decorated in ornamental plaster relief, interspersed with draped arches. Still more crystal chandeliers decorated the foyer and lobby.

Throughout its history, the Sunnyside Theatre was never successful, so in January, 1965, it was totally demolished and replaced by an A & P supermarket. The store was only half the size of the theatre, with the rest of the site used for parking space. To save money, the developer failed to level the ground used for the parking space, so it still has the seven foot pitch of the Sunnyside’s auditorium floor.

I and many of my friends spent a lot of time at this theater. We all used to chip in our pennies to get one of the guys in and then run around the side door which he would open and we would run in and hide for a few minutes until things settled down and then watch the movies. Hard to believe it wasn’t successful, but I guess if everyone did as we did it was a miracle it didn’t go bankrupt sooner.

When I moved to NYC, from Schenectady, in 1958 I attened Bryant High School. I remember in January of 1960, my senior year, I used to go to this theater with my friend Tom Trivisone after we took Regents exams. It was a pleasant way to relax after the tension of studying for and takeing these exams. I belive one of the movie we saw during that month was “Operation Petticoat” with Cary Grant and Tony Curtis. I remember the theater being very spacious and well maintained compared to the Deluxe which was closer to me on Roosevelt Ave and 62 Street. I am glad to hear that one part of the theater is still left, namely the pitch of the parking lot.
Tom Halstead

Imagine this beautiful place was just a neighborhood house, wow.

The opening date for that section of the IRT Flushing line was April 21, 1917. So, it was there before the theatre. I guess the marquee was wrapped around the support of the el as a necessity.

I noticed Warren Harris' post mentioning the 43rd Street theater. I thought you guys forgot about it. It was on Greenpoint Avenue between 42nd and 43rd streets in Sunnyside. I attended the last picture show (that would make a good movie title) where they pasted envelopes under some of the seats and told us after the movie ended to look under our seats. I forgot what the prizes were, I guess because my seat didn’t have an envelope taped under it.

PapaCat you should post your comments on the 43rd Street on the 43 Street site.