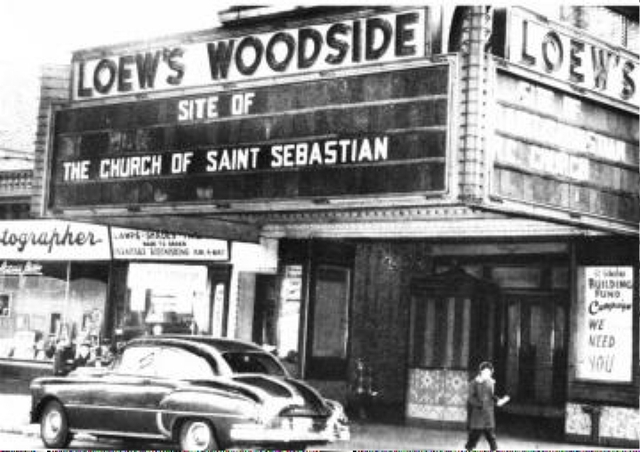 Loew’s Woodside Theatre was designed by Herbert J. Krapp, with all of its 2,000 seats on the ground floor and a shallow stage suited only for movies. It first opened on the night of September 27, 1926 with a pre-release screening of MGM’s Buster Keaton comedy, “Battling Butler”. The next day, the Woodside Theatre began its regular policy of a feature movie and shorts, changing three times a week. The programs were first-run for the Woodside section of Queens and the adjacent communities of Sunnyside, Jackson Heights, and Elmhurst. With the arrival of talkies, the Woodside Theatre switched to double features.

For several decades, it was on the third tier of the seven Loew’s theatres in Queens. The Valencia Theatre got the programs first, followed a week later by the Triboro Theatre. Then the Woodside Theatre, plus the Prospect Theatre, Plaza Theatre, Hillside Theatre and Willard Theatre. All of those third-tier theatres were eventually divested by Loew’s as part of the Federal anti-trust action against it.

The Woodside Theatre was the first to go, sold in 1952 to St. Sebastian’s Roman Catholic Church, which had outgrown its original chapel. The church demolished the theatre entrance and lobby to build a Romanesque bell tower, but kept the auditorium intact. In 1998, to celebrate the parish’s 100th anniversary, most of the original auditorium decor was beautifully restored, though probably not in the exact same color scheme. That included not only the domed ceiling, but 40 columns along the side walls that were returned to their original marble with gold leaf capitals.

The site is well worth a visit if you’re in the area. Masses are held at 5 and 6PM on Saturdays and on Sunday mornings, as well as at other times. The phone number is 718-429-4442.

Toward the end of the attached terrific exploration of the lost Woodside, there are several fine external pictures of the old Woodside Theatre and the new St. Salvadore’s. This was put together by Christina Wilkinson (the Queen of Queens), who has done wonderful work for many West Queens communities in many different ways. Please enjoy the entire attachment, which links pertinent “non-topic” items with the real cinematic thing.

Good to see that the building is still there as a church.Nice history.

Some June 2010 pictures of the former Loew’s Woodside are near the bottom of this page, as Forgotten New York revisits the neighborhood.

Nice photo of the LOEWS WOODSIDE/CHURCH.RickB.

Thank you so much TT for resurrecting – an apt religous term – this previously lost link that really establishes the connection of the old movie palace to its current religous use. This really represents one of the most successful re-uses of an old movie house than I am aware of.

As a long-time Woodside resident, and if my memory serves me correctly, the last movie that played in this theater was “Mr. Roberts.” After it was converted to a church, most of the kids in the neighborhood switched churches and went to mass here, as it was the first, and only church at that time, that had air-conditioning.

Direct link to the announcement in .pdf form.

A selection of images as church can be viewed here

Who knew that this could ever happen here