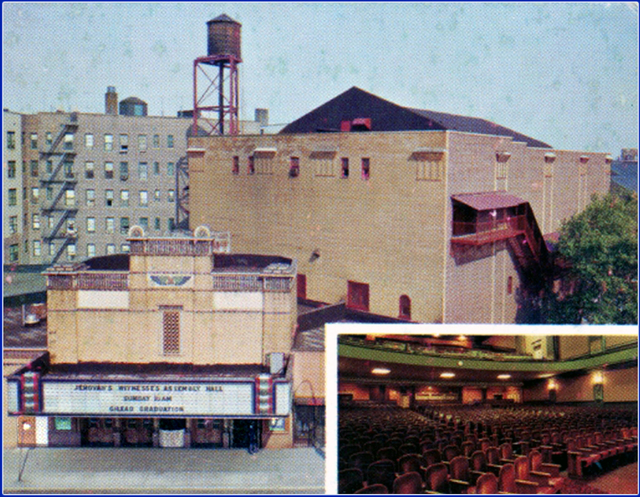 I’d long thought that the name Bliss was chosen to describe the joy of moviegoing, but it actually honored Neziah Bliss, one of the founding fathers of the Long Island City area that includes the Sunnyside section of Queens.

The Bliss Theatre first opened on December 27, 1930 and was built by Century Theaters with its usual architect-designer team of R. Thomas Short & William Rau. By that time, the sound era was well underway, so the Bliss Theatre was designed solely for movies, with a stage just deep enough for the hanging of a Magnascopic Screen that could be enlarged for special effects from the projection booth.

The Bliss Theatre’s interior décor was a modern interpretation of motifs found in ancient Egyptian architecture. Boldly-colored murals on the side walls and above the proscenium arch depicted scenes from Egyptian history. Located in the heart of the Sunnyside shopping district, the Bliss Theatre was never more than a subsequent-run neighborhood house until the 1960’s when movie distribution switched to city-wide Premiere Showcase openings. But the change didn’t increase attendance at the Bliss Theatre, and Century decided to close it due to its high operating costs.

The building was sold to Jehovah’s Witnesses, which converted it into a church with almost no changes to the exterior. The interior, however, has been extensively renovated, although an atmospheric lobby remains but with new paintings on the walls. The new owners removed everything of the Egyptian decor that showed nudity and/or pagan symbolism. The result now is an auditorium that looks like it was built yesterday, though you can still find touches of the original Bliss Theatre decor if you look hard enough. Church services are held every Sunday morning at 10 AM, and non-members are welcome to attend.

Here is an item in the August 1, 1953 edition of Boxoffice magazine:

The holdups began June 12 with a $1,600 haul at the Sunnyside Theatre, Queens. On June 28, according to police charges, the robbers got $1,300 from the Bliss Theatre in Queens, on July 8 $800 from the Fortway Theatre in Brooklyn, and $400 from the Dover Theatre, Bronx, Monday July 27. In between theatre jobs, the bandits are alleged to have held up a number of taverns.

Any pictures of the interior as it looks now? I wonder if they would let anyone take photos. Why are some people against letting someone take a photo?

Looking at the photo you posted on August 11, 2010, also appears they removed at least two decorative elements from the main facade above the marquee: what appears to be a glazed terra cotta set of wings high on the center elevation and two series of carvings or “drawings” on either side. I wonder why the interior was stripped so drastically? Meanwhile, in Jersey City, the Witnesses have painstakingly preserved original Stanley Theatre auditorium.

Correction. Another site says it changed to the JW hall in the 70’s.

If anything, I’m surprised that the Bliss lasted into 1965 as a movie house. Were it not for TT’s documentation, I would have placed the conversion at least a few years earlier. At least that’s how my less than perfect memory records it

Hello, I wanted to comment on LarryC’s question as to what year Jehovah’s Witnesses began using the Bliss Theatre. The property was purchased in 1965 and went into use shortly thereafter. This location is used as an Assembly Hall, where Witnesses meet for annual one and two day assemblies and 3 day District Conventions. Although the public is more than welcomed to attend, keep in mind that foreign language congregations also use this assembly hall. So, ask an attendant if an English language assembly or convention is going on the day you visit. Otherwise, you may not understand the language spoken. But, you’re still welcomed to stay! :–)

I have photos of the interior of the theater I took back in 1990. They were nice enough to allow me to take as many pics as I wanted. I shot a whole roll of film from all over the theater. As soon as I upload these pics I will post.

Uploaded a 1931 Century ad which included the Bliss.