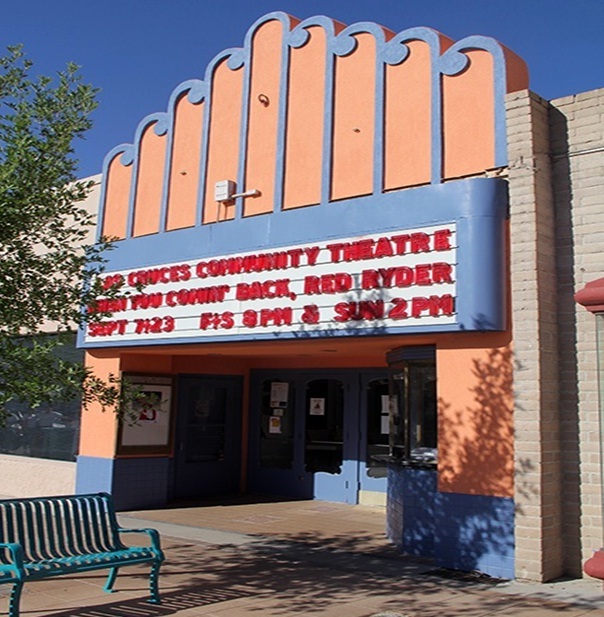 The Las Cruces Community Theatre moved into the old State Theater building in downtown Las Cruces in 1977 or 1979. LCCT was founded in 1963 and is still going strong.

The Las Cruces Community Theater is a stage theater, no screen. It will never show movies. Why is it listed in a Cinema listing?

The Film Daily Yearbook, 1943 edition has the State Theatre listed with a seating capacity of 550. It was operated by Fox Intermountain Theatres.

The 1950 edition of F.D.Y. has the State Theatre listed with a seating capacity of 563.

OK, I can live with that. I’ll get some of my photos dusted off and post them. I only have current photos, but I’ll send them along.

This article from the Las Cruces Sun-News has a few lines about the State Theatre, saying that it opened on Christmas Eve, 1941. That date suggests that the State was probably the unnamed theater that was the subject of this item in the August 29, 1941, issue of The Film Daily:

“Las Cruces, N. M. — One of the last remaining Las Cruces landmarks — an old adobe building on north Main St. — is being razed this week to make way for a modern new theater building being erected by Willis Buckley and Glenn Hamill and leased to the Fox Intermountain Theater Co.

“The building and grounds will entail a cost in excess of $30,000. The structure is to be of hollow tile with seating capacity of 600. The theater is expected to be ready for occupancy in about 90 days.”

The December 21, 1941, issue of the Las Cruces Sun-News mentioned Guy Frazer as the architect of the new State Theatre, which was scheduled to open Christmas Day. This must have been Guy L. Frazer of the El Paso, Texas, firm Frazer & Benner.