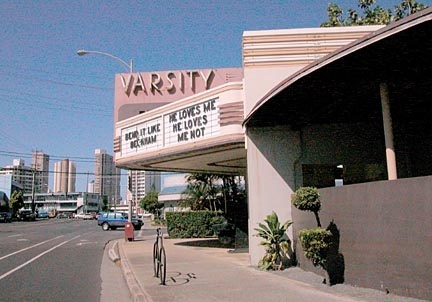 Opened September 8, 1939 with John Wayne in “Stagecoach”. The Varsity Theatre was designed by architect C.W. Dickey for Consolidated Theatres. During the late-1960’s and early-1970’s, the University of Hawaii used the theatre as a large daytime lecture hall.

On March 22, 1985 it was converted into a two-screen theatre, and since the late-1980’s, the Varsity Twin Cinema had specialized in bringing a loyal Hawaiian audience their newly-released art-house films.

After nearly 70 years, the Varsity Twin Cinema closed its doors on June 17th, 2007. It was demolished in early-2008, initial plans are to use the site for parking.

I’m sorry too. Here is today’s article on the demolition from the Honolulu Advertiser:

The old Varsity theater building in Mo'ili'ili was reduced to rubble yesterday after its owner, Kamehameha Schools, said recently uncovered structural damage made it cost prohibitive to save the building considered a landmark by some.

Though the building designed by noted architect C.W. Dickey is now gone like the era of single-screen movie theaters, parts of the theater â€" from bathroom sinks to the neon V-A-R-S-I-T-Y sign â€" were donated to nearby schools, organizations and businesses for reuse.

“The theater itself had many memories for a lot of people (but) the longer it stood there the more of a liability it was,” said Kamehameha Schools spokesman Kekoa Paulsen.

Paulsen said that after Kamehameha Schools acquired the building from a California-based affiliate of Consolidated Theatres that had closed the Varsity in June 2006, the trust initially envisioned renovating the building’s interior and leasing it to a commercial tenant until a longer-term redevelopment plan was devised.

But Paulsen said structural damage that included cracked walls from foundation settling pushed the estimated renovation cost to around $3 million to $5 million, which made the interim leasing plan financially infeasible.

“Some of the cracks ran all the way up to the ceiling,” he said.

So the former theater site is destined to become a public parking lot for at least the next three to five years.

In an effort to preserve some nostalgia of the theater built in 1939, Kamehameha Schools offered parts of the Varsity Twin Cinema for free to interested groups starting with schools and nearby community groups.

The horizontal neon V-A-R-S-I-T-Y sign above the movie title marquee was given to The Varsity, a bar across University Avenue from the theater site.

“The Varsity theater is our namesake,” said Nick Schlapak, managing partner of the bar formerly the home of Magoo’s Pizza.

“It’s a piece of history for the neighborhood.”

Schlapak said the galvanized steel sign with white neon lights inside each letter was broken and had been vandalized, but should be repairable.

Schlapak said he’d like to put the sign outside the bar if the city grants a permit. The bar also adopted two large cast iron projectors that stood like statues outside the theater that are intended for display.

Paulsen said several organizations looked through the Varsity for collectibles or reusable fixtures that included the theater’s popcorn machine and bathroom sinks, though some items including theater seating and tattered wall curtains attracted no takers.

I swung by the Varsity Theater demolition site today and made this video:

I stopped by as well an hour or so before they started the demolition, but I did not want to watch, it’s all to sad.
I remember watching the Royal come down, I drove there with Royal Development CEO,Herman Rosen, and after a few minures he said
“I can’t match this, lets go”

I imagine it is a parking lot by now. Much needed, I’m sure.

Sorry to hear it’s a goner. The Varsity – a photo sent me by the manager circa 1996:
View link

I saw the movie ‘Ed Wood’ there when it came out in the early nineties. It was the most memorable movie experience I’ve ever had due to the film breaking in middle of the movie. I thought it was part of the film because it fit so perfectly within the content. It was a perfect error to a pretty entertaining film and I’m glad I was there to experience it. There was much laughter in the theatre as I think we all thought initially that it was part of the picture.

Undated photo added courtesy of Ron Whitfield‎, via the Waikiki & Honolulu in the 50’s & 60’s.

Opened on September 8th, 1939. Grand opening in photo section and below:

Bummer; another closed old-school theater. I was stationed on Oahu from late 1983-1987 and saw movies mostly in other theaters (like Waikiki 1,2 & 3, and the Kapiolani Theater) but did see Black Widow here in early 1987, shortly before leaving the islands. Then I moved back to Honolulu as a civilian from 2002-2005 and saw a few here with my wife and our young son. The one that stands out the most was seeing The Piano with my wife in the summer or fall of 2002, my first time back to the Varsity since 1987 and my wife’s first time ever. So sad to see these old places go.