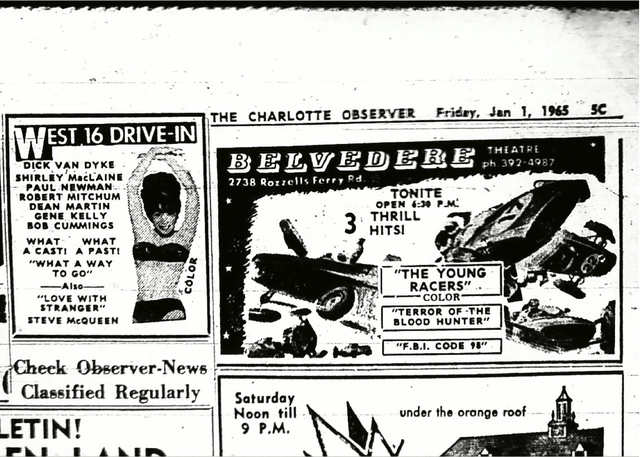 The building has a magnifcent prescence about her and looks as though she may have had a plaster job within the past 5-10 years.

It would be quite easy to open her back up but I am afraid the neighborhood has ready dictated that plan. In November 2011, it was converted into dental offices.

Here is the new location to the 1951 Boxoffice photo of the Belvedere Theatre that Gerald DeLuca linked to in an earlier comment.

The J. Murrey Atkins Library at UNC Charlotte has a collection of drawings and blueprints of projects built by the Mecklenburg Iron Works, and the Belvedere Theatre is among them. The Mecklenburg collection is not yet among the library’s special collections that are available online. If someone with access to the library could take a look at them, the name of the architect is probably on them. As the drawings are in a special collection, the library might require advance notice from anyone who wants to examine them. Here is the library’s web site.

Raysson, where does your information come from? I attended movies here in the late 50s and early 60s and remember a lot of Rock Hudson, Doris Day, beach and surf movies and one stand out – PT109 from 1963. I know I was only a child – wow, I was 10 years old in ‘63. I distinctly remember going to this theater to see PT109 with my two younger cousins in tow and no parental supervision, because a boy I didn’t know sat beside me and I was so shy I took my cousins in hand and walked them home without seeing the end of the movie. We are white and I do not recall blacks there, and it certainly was not “Negroes Only” at this time. I’m not being racist or attacking anyone here, I’m just really puzzled and sincerely want to find the source of this information. Was it newspaper ads for movies? Can you tell me more? The opening announcement linked in the message above doesn’t indicate this is a black only theater, or integrated either. My elementry school in Charlotte-Mecklenburg integrated in 1965.

Just added an Ad from the Charlotte Observer – 1965 for the theater.

This web page from the Charlotte Chamber of Commerce tells about the conversion of the Belvedere Theatre into offices. It gives the wrong opening year, though- 1955. It also says that the house was originally built for African American audiences, but doesn’t cite a source. The caption of the 1951 Boxoffice photo I linked to didn’t say anything about it being an African American house, and that’s something the magazine usually noted in those days.

This Blogger post has scans of a couple of ads from the Belvedere Theatre, about third of the way down. The last comment on the page, by John McElwee, also has information about the Belvedere from a former patron who attended the house around the time it opened (the page is formated to have pale type on a black background and is virtually unreadable. Try left-clicking your mouse and highlighting the text as though to copy it, and it should become readable.

I have the opening ad to the grand opening of the Belvedere Theatre from December 25,1950 from The Charlotte Observer.

This former theater now dentist office is not on the south side of town and to my knowledge was never “Negros Only”. It is located about 2 miles northwest of uptown Charlotte. I went there many times throughout the 1960"s.

I notice that the page uploaded by rivest266 includes a courtesy ad from Wooten & Wooten, the local architecture and engineering firm that designed the Belvedere Theatre. I’ve been unable to find anything about the firm, as there is now an auction house of the same name that dominates search results. 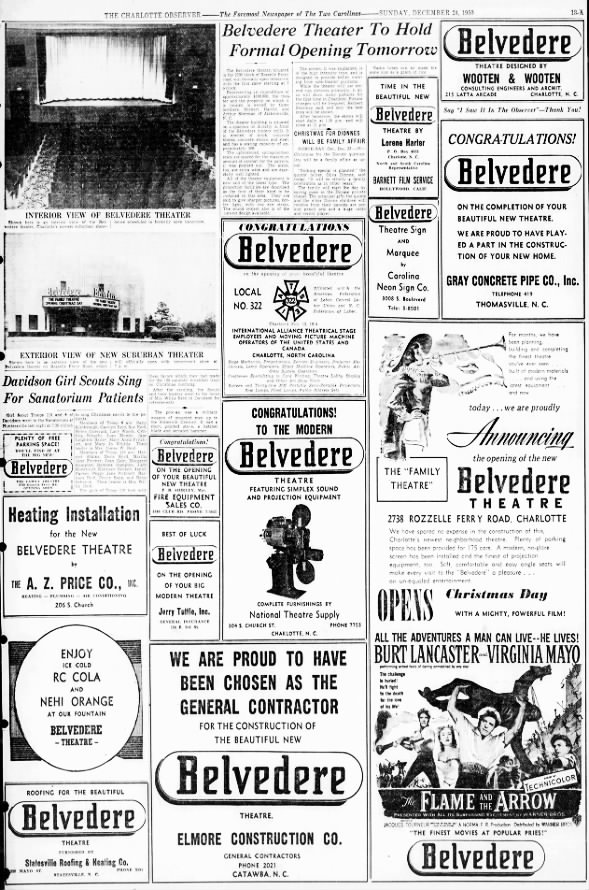