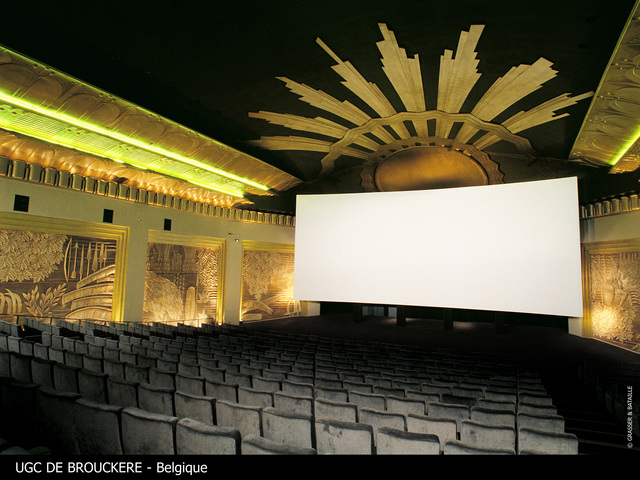 Originally on this site was the Cinema des Princes which was demolished in 1932 and the new Eldorado Cinema was built. This giant theatre was one of the biggest in Belgium ever, seating 2,705, and opened in 1933. Designed by architect Marcel Chabot, the single screen auditorium was completly constructed with re-enforced concrete (3,000 m3 of it), which allowed for two big balconies.

It featured many modern and luxurious features such as elevators and air conditioning, 90,000 m3 per hour was pumped into the hall.

The screen (Magnoscopique) measured 10.40 x 8.50m (34 x 28 ft). All the electricity was wired by 14km of tubing and 43km of wires. The projection booth was fitted with Ernemann projectors and Western Electric provided the sound.

The Art Deco style auditorium was inspired by African art and has decorative panels on the side-walls which were designed by C. Rodriguez with reliefs by Wolfe and Van Neste. In 1938 the facade and foyer were re-constructed to the designs of architects Leon Stynen and R. Grosemans. The foyer was in the International Modern style with cubist decorative panels by Van Vlassalaer.

In 1974 the auditorium was sub-divided into six-screens, with another two added in 1978. The upper part of the main original auditorium survives almost intact as the ‘Grand Salle Eldorado’. Seating here incorporates the two former balconies, the lower one now extended forward towards the former proscenium.

French exhibition giant UGC acquired the historic theatre in 1982 and renamed it UGC de Brouckere. It was restored and reopened in 1992 with a further four screens added in the adjacent building next door which originally had been the Scala Cinema. I recent years a screen has been built on the roof of the building, giving the entire cinema complex a total of 13 screens.

Thanks to Ken Roe for amending the Intro to better describe the interior changes. My notes from 2001 indicate a balcony closed, but open when the cinema was full, in the ornate historic Eldorado auditorium. So, the current Eldorado probably consists of the 2 former balconies with people sitting in the former 1st balcony, and sometimes in the upper balcony.

I estimated the screen at 45 feet feet wide. No curtain was used.
I saw an Art Deco sunburst pattern on the ceiling.
A really fun place to see a movie!

A vintage postcard view from 1967, night view of the Eldorado Cinema, with its original facade. Also the adjacent Scala Cinema:
http://flickr.com/photos/pulp-o-rama/222326844/

This B&W photo shows the auditorium before the installation of the large screen in front of the proscenium.

Exterior and lobby photos from June 2009.

I’ve seen the following films in this cinema: The Jewel of the Nile, The Goonies, Fatal Attraction, Far and Away (in 70mm) and 1492. Now to clarify a few points:

In the 1992 renovation, they got rid of the masking and curtains and benefitted from the free space on the sides to install a much bigger screen which is the current screen. There is still available space on the sides for masking and curtains but they can’t do this because passageway must remain to get to the exit doors behind the screens (and it was no longer in any circuit’s policy to have tabs anyway). When it reopened in 1992, I visited the booth with the chief projectionist. All booths had the new Dolby CP65 processor and used Altec Lansing amplifiers and speakers. Although it was not a THX installation, the main auditorium used the THX-certified Altec A10 speaker systems with active bi-amplification behind the screen. Also, the main auditorium plus one smaller one (for move-overs) had been equipped for 70mm. If I remember correctly, they used a DP70 projector in the big one and a DP75 in the small one.

The original name Eldorado was superseded by the new name UGC De Brouckère when taken over by the French circuit UGC which typically uses the company name plus location name as big circuits do, but aficionados usually refer to the main auditorium as the Grand Eldorado in order to distinct it from the rest.