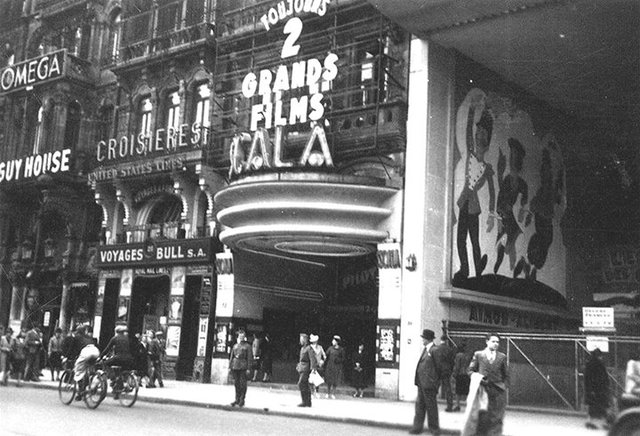 The Scala Cinema is one of the older cinemas to operate in central Brussels. It opened in 1896 as a cafe-concert venue. In 1900, films were being screened in its 500 seat auditorium. In 1927, it was given a make-over in an Art Deco style and the seating capacity was increased to 960. In 1976, the balcony was converted into a second screen.

It is located adjacent to the former Eldorado Cinema of 1932 (now operating as the UGC-de-Brouckere), which has now been sub-divided into eight-screens.

UGC took over the Scala Cinema in 1992 and sub-divided it into four-screens, which are now included as part of the UGC-de-Brouckere, plus in recent years a screen built on the roof of the building which gives the entire cinema complex a total of 13 screens.

2005 exterior photo of where this former cinema was:
View link

I think ouef is either “egg” or “nothing” so maybe “tout n'oeuf” means “all or nothing'?

The Scala can be seen in this vintage 1967 postcard, night time view next to the adjacent Eldorado Cinema:
http://flickr.com/photos/pulp-o-rama/222326844/