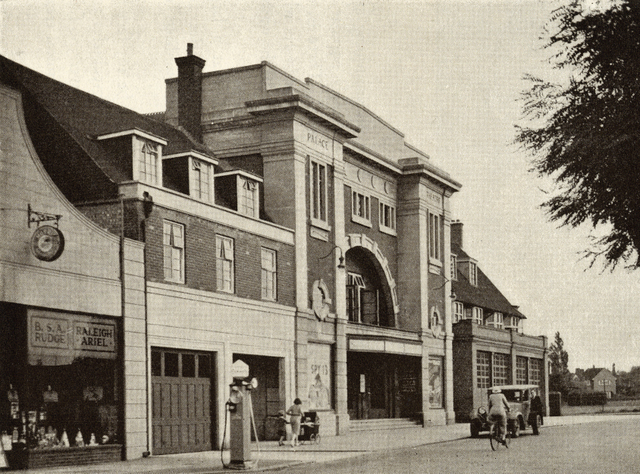 Located in Letchworth Garden City, Hertfordshire. Said to be the first purpose-built cinema to be built outside London, the Palace Cinema was opened on 6th December 1909. it was designed by Letchworth architects Barry Parker & Raymond Unwin. Seating was provided for 750 on a single floor, with boxes at the rear. It was the first building in the town to have an electricity supply.

The Palace Cinema was closed on 6th June 1924 to be reconstructed to the plans of Letchworth based architect Edgar J. Simmons. The façade was re-built and had the name ‘Palace Theatre’ along the top stonework. The roof of the auditorium was raised to allow for a balcony. Seating was now provided for 1,000. It re-opened on 15th September 1924 with “Going Up”. Around 1930 it was equipped with a British Thomson Houston sound system.

In 1936 the owners of the Palace Theatre built and opened the Broadway Cinema almost adjacent, and the Palace Theatre continued to operate until it was closed as the Palace Cinema on 31st December 1977 with “The Last Remake of Beau Geste” and “The November Plan”. The building was demolished in August/September 1985.

A Poundstretcher shop and Blockbuster video store first occupied the new building on the site, which has residential flats upstairs.

A photo of the Palace can be found here:–