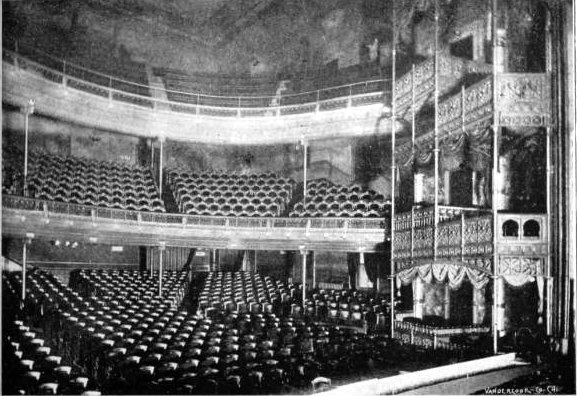 One of the first playhouses in Chicago. It opened in 1872 as Hooley’s Theatre, built a year after the Great Chicago Fire of 1871. It was re-named Powers Theatre in 1898. Seating was provided in orchestra and balcony levels.

The Powers Theatre was closed in 1924 and was demolished.

Did this theatre ever show movies?

I’ve found no indication that the Powers Theatre showed movies on a regular basis, but the house did run at least some movies. The April 11, 1912, issue of Chicago paper The Inter Ocean said that Famous Players' production of Queen Elizabeth, starring Sarah Bernhardt, was having its American premier at the Powers Theatre. The June 1, 1913, issue of the same publication listed the Powers as one of several Chicago legitimate houses that were then running pictures. Other houses had resorted to vaudeville to get through a slow theatrical season.

Still, the Powers remained primarily a legitimate house. The Moving Picture World of January 15, 1916, had a brief article for which Harry J. Powers was interviewed on the subject of the effect of movies on live theater. Powers said that his house was having an excellent season with plays, and even claimed that the existence of movies had improved business for legitimate theaters.

The five-week run of Queen Elizabeth in 1912 and the movies shown in 1913 might not have been the only movies at the Powers, though they are the only ones I’ve found mentioned in period publications. There are quite a number of theaters listed at Cinema Treasures that only showed movies intermittently. Though they were never full-time movie theaters, having them listed here doesn’t bother me.

I’ve actually considered submitting the Geary Theatre in San Francisco (the adjacent Curran, also primarily a legitimate house, is already listed) and the Biltmore in Los Angeles, both of which ran a few movies over their long careers (the Biltmore was actually built with a projection booth as part of the original plans, though it was seldom used.)

This CPL link has a 1910 playbill from the Powers.

My great uncle was arrested on 11 September, 1914, trying to sneak in to this theater. He was a 10-year old, so I’m guessing they were probably showing either movies or vaudeville.