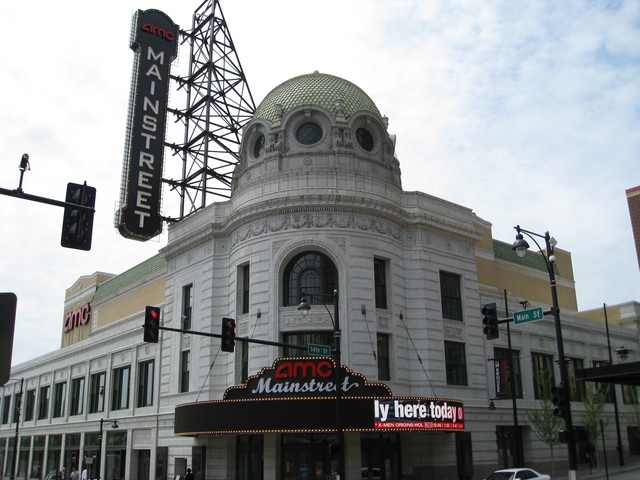 The 3,000-plus seat Mainstreet Theatre opened in October 30, 1921 with Conway Tearle in “After Midnight” on the screen and on the stage Eddie Foy & the Younger Foy’s in “The Foy Fun Revue” plus vaudeville acts. It was the only theatre in Kansas City designed by the Chicago firm of Rapp & Rapp. Its interior design was French Baroque style and the exterior a blend of Neo-Classical and French Empire styles. The lobby area is topped by a dome encircled by circular windows. In 1924 it was equipped with a Kimball 3 manual 10 ranks theatre organ.

It was the first theatre in Kansas City to contain a nursery for parents attending shows. The Mainstreet Theatre also featured an underground tunnel which connected it to the nearby President Hotel. Also, its basement and sub-basement contained space for animals used in the elaborate vaudeville shows put on at the theatre, including cages for animals as large as elephants (and elevators big enough to carry them up to the stage) and pools for seals.

From the time the Mainstreet Theatre opened until 1938, it was part of the so-called “Junior Orpheum” circuit, and among the famous names to play its stage were Charlie Chaplin and Cab Calloway, Harry Lauder, The Marx Brothers & Olsen and Johnson.

The Mainstreet Theatre closed for the first time in 1938, briefly reopened in 1941, and remained closed until 1949, when it was reopened by the RKO circuit, as a movie palace, called the RKO Missouri Theatre. It became a Cinerama house operating 3-strip and then single lens 70mm. On December 1, 1960 it was renamed the Empire Theatre. The Kimball organ remained in use until 1961 when there was a dispute with the Musicians Union and it was later removed. The Empire Theatre was twinned in 1967 and became a 4-screen theatre in 1980, but it closed once again in 1985.

Though plans to turn it into a Planet Hollywood-style entertainment venue and eatery were floated, it never came to fruition. Its owner was then seeking to demolish the historic (though not landmarked) structure, but local preservationists sought to save the former Empire Theatre. The Empire Theatre was placed on the National Register of Historic Places in February 2006.

In the fall of 1968 I saw “2001 Space Odyssey” I suppose in the lower Empire 2. Possibly in that same time period I say “Around The World in 80 Days” in the upstairs theater, a reissue? Last film I saw in the upper small theater was “Flap” Anthony Quinn Release Date: November 1970 (USA). That was the last film I saw there as I returned to California.

Grand opening ad from October 30th, 1921 can be found in the photo section.

This theater was shown during coverage of a royals game today and was featured in AMCs coming soon snipes in the late 2000s.

How much, if any, of the original auditorium is still in place?

JackCoursey, none of the original auditorium is visible to the general public. But when I was with AMC, the manager took us up to the old balcony section behind the new upper level theatres. That area still has the stadium tiers for the old upstairs theatre.