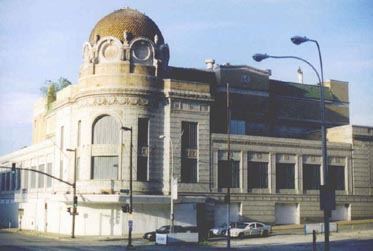 KANSAS CITY, MO — The Empire Theater has survived another round in an ongoing battle between developers, who control the property, and those interested in saving the historic theater. Only this time, it appears that the battle may be nearing its end.

Preservationists experienced a sigh of relief on Nov. 11. The Kansas City Star reported that a plan to construct a new headquarters for Kansas City Power & Light on the theater’s site had been rejected by city leaders. Developers sought the entire Empire Theater block to erect a new office tower for the utility company, which rents space just two blocks away.

From the Star article: “Kansas City Mayor Kay Barnes said Wednesday that while city officials will continue to work to keep KCP&L downtown, the Empire Theater block will remain part of the Kansas City Live entertainment district and be redeveloped by the Cordish Co. of Baltimore. Cordish wants to reuse the old vaudeville and movie theater palace as a live music venue and lounge.”

“We want this to be a win for Cordish and a win for KCP&L as they consider downtown,” Barnes said. “The Empire block will stay with the Cordish plan, and we will work with KCP&L as they explore their options.”

The Star reported: “While the city does not own the Empire Theater block, it is included in the broader South Loop redevelopment plan. That plan allows the city to obtain necessary property through condemnation.”

The city has the authority to take the Empire Theater through use of eminent domain.

The Star also reported: “Historic preservationists were pleased the old theater would remain part of the Kansas City Live plan. Although the Empire does not have official landmark status and the protection that provides, the 83-year-old theater is dear to the hearts of many preservationists. The building was recently included on a list of downtown structures the Kansas City chapter of the American Institute of Architects believes should be saved.”

A redeveloped Empire Theater would be part of a large entertainment district and new downtown arena that are being contructed in the neighborhood. The Empire Theater will be surrounded on three sides by this district. Kansas City’s other venerable downtown theater, the Midland, sits just one block away on the same street. It is currently used as a performing arts venue.

The Empire is the only remaining theater in Kansas City that was designed by Rapp & Rapp. It opened in 1921 as the RKO Missouri. Its name changed to Main Street Theater in the 1930s. In 1949, the name was changed to RKO Orpheum. The name changed again to Cinerama in 1956. Then AMC bought it in the late 1950s and changed the name to Empire.

In the 60s, the Empire was split into two theaters: The Empire and the Royal. In 1980, it was converted into four theaters and called Empire 4 Theaters. It stopped screening films and closed in 1985.

The entire Kansas City Star article can be viewed at: http://www.kansascity.com/mld/kansascity/business/companies/10149232.htm

Another theatre battling a utility company…one only has to read the Fabulous Fox saga in Atlanta to realize that a win-win solution can be worked out!

“The Kansas City Star reported that a plan to construct a new headquarters for Kansas City Power & Light on the theaterâ€™s site had been rejected by city leaders. Developers sought the entire Empire Theater block to erect a new office tower for the utility company, which rents space just two blocks away.” BellSouth in Atlanta wanted the land that the Fabulous Fox sits on, but a compromise was reached and the Fox is still fabulous today! If one wants to see what was saved, one only has to walk inside the doors of the Peachtree Street Fox to realize how important saving a theatre such as that one was which happens to be an atmospheric theatre which makes the end result sorta like “icing on the cake”!

Can anyone post some old photos of the Empire?

Great to see a crew in there working on the historic Empire Theater.
It will once again be a jewel in Kansas City with the new Power and Light District development.
Mike Gallagher

About a year ago I posted my thoughts on this theatre and now I find myself back here a year and 2 days later! Glad to see that the Mayor of Kansas City, Kay Barnes realizes the importance of saving this historical theatre….the exterior design, alone, is reason enough to save it from that wrecking ball that appears too many times in this country! The only good reason I see for the wrecking ball is to tear down crack houses and other undesirable sites that attract many of our youth today.

Are there any photos that have been posted that show the theatre with no boarding on the front facade? I would like to see what the marquee looked like. The second kclibrary photo provided in the 3/17/05 post of the dome is awesome and may be the only theatre with such a design in the country as I don’t recall seeing any others with that very unique piece of architecture on CT. When a city has to fight the owner of a theatre to save it that makes the battle even harder for it seems to me the owner should be the one wanting to save it!

To demolish this theatre to make room for perhaps office space, condos, parking garage, etc. would be a crime as this theatre has so much architectural ‘presence’ and so much historical value!

Could not read the entire Kansas City Star Empire Theater article when clicking on the above link.

Here’s some links to some old photos of the theater (circa the 1930s) when it was operating, and not boarded up.

Here are links to renderings of how the theater will appear after the renovation is completed. The name will change back to the original name, the Mainstreet Theater.

These renderings show how the theater will fit into the surrounding entertainment district that is being constructed around it.

Here is a live webcam view of the ongoing construction of the new entertainment district, named the Power & Light District, around the existing Mainstreet (Empire) Theater. The theater is the domed structure near the top of the image.

The view will not be as good at night obviously, and also will be affected by weather. It may take a few seconds for the screen to appear on slower computers, or those using dial-up service.

The district will be anchored by the Midland and restored Mainstreet (Empire) theaters, the new Sprint Arena, and the newly restored Hilton President Hotel.

Another theater is being constructed across the street from the Mainstreet (Empire) Theater that will be an additional performance venue for the Kansas City Repertory Theatre. It is the building extending into the right center next to the parking garage in the lower right corner of the image. When viewing at night, it’s the building with the upturned floodlights on the sides of the structure.

Here’s a bit of interesting history. The new KC Rep. performance space sits on the former site of the Globe Theater, which was demolished in 1932. According to an article in the Kansas City Star reporting the demolition, the Globe’s “greatest claim to histrionic distinction here [Kansas City] is that the talking movie. ..was introduced within the Globe walls.”

The theater introduced Vitaphone to Kansas City with the screening of “Don Juan,” starring John Barrymore, on June 11, 1927.

Does everyone realize that they have gutted the theatre and are going to build smaller auditoriums inside?

Someone needs to clean the webcam lens cover, it seems to be covered with muddy splotches. I worked in this theater as a projectionist in 1981-82, even had a key to the door. I always thought it should be restored, as there were fascinating unused areas, such as behind the main screen were the old dressing rooms from the RKO days. There are two basements under the building, and at the time I worked there it was thoroughly infested with roaches. We were running second run films at the time, but the facilities were pretty good, with decent sound, helped by the cavernous size of the place. Even the upstairs balcony theaters were huge. The lobbies were faded and dirty, but the glamor was still there under the grime and dust. I broke my foot running down the main marble staircase one day and had to take tickets in a cast for weeks. I was inspired to pursue a career in the entertainment business, partly from my experience at the Empire. Thanks for posting this site, it has been a fun trip down memory lane for me.