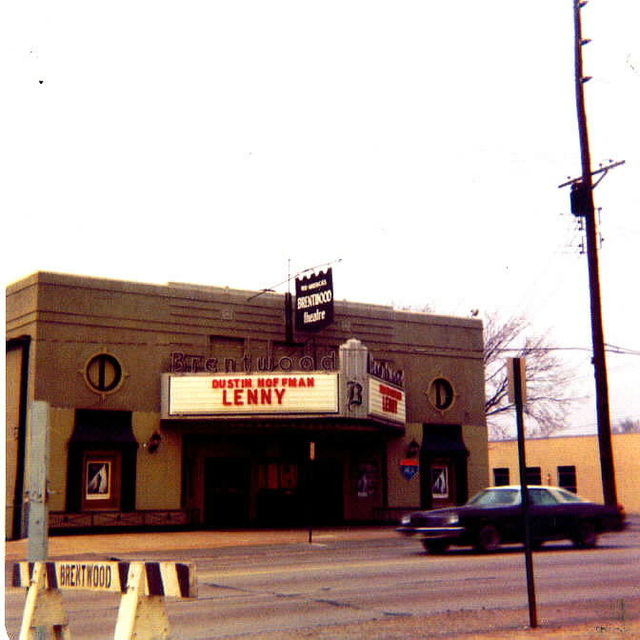 Located in Brentwood, to the east of St. Louis, MO. The Brentwood Theatre opened on March 14, 1942. It was a well-run theatre located in an affluent neighborhood on a commercial strip. The theatre seated 700. It went through some problems during it’s tenure as a motion picture theatre. There were bomb threats in 1965 and 1972 causing evacuation. There was a bungled burglary in 1968 (netting $11), whereby the bandits were caught when they dropped tire irons while hiding and the police apprehended then.

Billie Lasker (a smut-fighting grandma) led a march to the local prosecutors office in 1972, in protest to the theater’s showing of <em>Everything You Wanted To Know About Sex But Was Afraid To Ask</em>.

The theatre had very limited parking and therefore patrons would park at neighboring areas and a problem was created again as the theatre patrons returned to their cars to be greeted by a parking ticket.

The Brentwood Theatre was always a very well maintained and well-run theatre while in the ownership of Mid America Theatres. It ran mostly first-run features and art films.

When AMC opened their four screen down the road, in the Galleria Mall, the Brentwood Theatre was closed.

This is a small photo of the H&R Block building, however, the address is 2525.
http://tinyurl.com/6xgppa

For its first 24 years of operation, the Brentwood was a typical neighborhood house. In 1965, when Mid-America Theatres was beginning its expansion, the Brentwood was remodeled (design by Martin Bloom and Associates) and reopened with the 2nd-run of “My Fair Lady” that December. The first exclusive first-run engagement at the Brentwood followed in April with “A Thousand Clowns.” Long runs were the norm at the Brentwood with “Midnight Cowboy” running 35 weeks; a hardticket engagement of “The Lion in Winter” running 34. Management changed to RKO Mid-America in 1984, then AMC in 1985. Not fitting AMC’s multi-screen pattern, they closed the theatre in July 1986 saying the Brentwood was “old and inefficient.” The theatre reopened as an indie (with $1.50 admission)briefly, from August to October that year. The final film shown was “Legal Eagles.”

Never went to this theater…but it’s interesting how the black banner were used at this theater. Exaclty the same as the banners on the Fine Arts (Beverly) Theater. The picture of the Brentwood makes it clear this was still the case when RKO-MidAmerica, rather than just MidAmerica, ran the theater. Did other Mid-America theaters have the black banners? Like the Esquire or the Crestwood, for example? Don’t believe the Village Square ever had those…

Here is an item from the July 3, 1941 issue of The Film Daily about the Brentwood Theatre:

“Construction is going rapidly along on the new 700-seat theater being erected on Brentwood Blvd., Brentwood, Mo. The Stamm Construction Co. of St. Louis are the general contractors. The house will be ready by Dec. 1. It is the first theater to locate in Brentwood.”

Brentwood is to the west, not the east, of St. Louis.