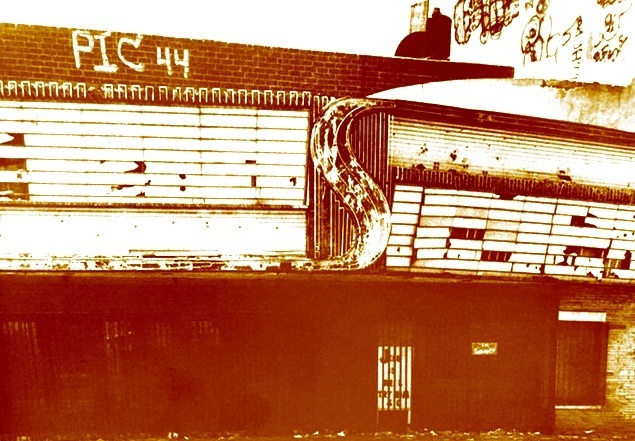 The Rio Theatre was opened on December 25, 1948 with John Wayne in “Red River”. It was one of many neighborhood theatere that stood along the streets of Los Angeles. The last major chain to run the Rio Theatre was Statewide Theatres.

Thanks for the link Ken. Joe, I guess my memory wasn’t so bad after all. The 1952 aerial image of Western and Imperial avenues show the Rio very near the northwest corner of the intersection as well as Scrivner’s drive-in on the southwest corner. It looks just exactly as I remember it.

The building on the northwest corner of Western and Imperial was a gas station. In the 1952 aerial photo the roofs over the pump islands are attached to the main building, but in 1972 the islands are free-standing. The gasoline companies were always rebuilding their stations, and they built duller buildings each time.

The early announcement of plans for the Rio published in Boxoffice Magazine’s issue of August 21, 1948, said that the theater would be at Western and Imperial, and would include a commercial building on the corner containing seven stores. That part of the project never got built.

Sandwiched in between screenings of â€œVanishing Pointâ€ and â€œShaftâ€, the Rio Theater at Western Ave. and Imperial Highway is presenting members of the Watts Writersâ€™ Workshop in a live production of Elizabeth Leigh-Taylorâ€™s â€œCinderella Brownâ€. If this first experience of mixing the media is any indication of trends, the concept has about as much future as the Titanic.

Sad to report, this black parable on the Cinderella story seems desperately out of place in such a cavernous monument to Technicolor-Vistavision such as the Rio. But, sadder yet, there is an excellent chance it may be out of place anywhere. Since parts of it were inaudible due to echoing acoustics, weâ€™ll have to give the play the benefit of the doubt. But not much.

Saw quite a few movies at the Rio living in South L.A. early and mid-60s. Used to get my haircut at a barber shop just to the North.

Interestingly, that Dec ‘58 ad tells me where I was during that week since I saw “Cat on a Hot Tin Roof” at the Ritz in Inglewood.

Hit the submit button before I was finished. Saw “Gorgo” and “Babes In Toyland” at the Rio Theater.

The Theater was not on the corner, but just north of Imperial on Western Avenue on the west side of the street.

The Rio brings back lots of memories for me. Some good and unfortunately, a lot of bad. Located in the middle of gang infested territory when I first saw the theater in the late sixties – early seventies, it had already been closed for many years.

A Black Bus Driver from the then MTA, (I can’t remember his name) wanted to reopen the house to have a neighborhood theater again, and sunk his money into the project.

He approached me as one of the few Black and Licensed Projectionist around to help him with the project. In those days, Projectionists had to be certified and licensed through the Department of Building and Safety in Los Angeles.

I trained a projection crew, and ended up being the manager of the theater so a licensed projectionist was on site. The theater was only open on Friday, Saturday, and Sunday’s with plans to expand later.

The gangs made the theater a focal point for confrontations and the L.A. County Sheriff’s Department was constantly being called, and we pulled more than one gun out of the theater on shakedowns. Jamel Barnes, Tookie Williams, and Raymond Washington were all fledgling gang leaders and I knew all of them personally through my work with L.A. Schools Youth Services with my working buddy and college roommate, Cliff Stewart. They were in and around the theater constantly with their “crew.” These guys were all 15 and 16 at this time. It was just a matter of time before things exploded. The Crips had claimed the theater as “their territory,” and the Bloods didn’t take kindly to it.

Finally there was a shooting near the theater and threats were made for more if it opened. The owner closed down, which angered Sheriffs Deputies who had volunteered to work on their own time to prevent that from happening. They didn’t want the gangs to continue to ruin the neighborhood and dictate who could do business, and close the theater.

The last film shown was “AKA Cassius Clay.” I ran it 2 nights, put it in the can, and the doors closed forever.

WE NEED ANOTHER THEATER HERE…MEGA $