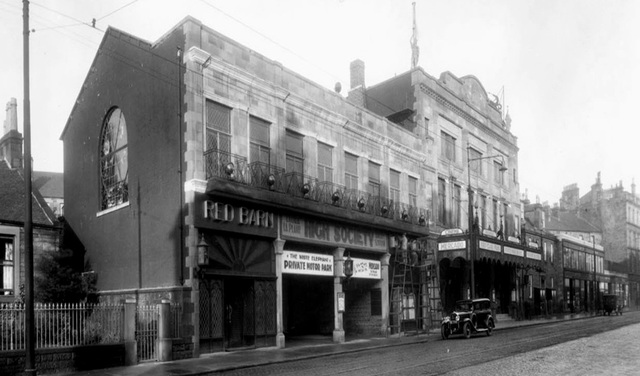 In the Shawlands district of Glasgow, the White Elephant Cinema was opened in 1927 by A. E. Pickard. The rather odd name was the result of a competition to find a name for the whole complex, which also incorporated a dance hall, restaurant and car park. The eccentric Pickard (of the city centre Panopticon Theatre fame) had a large model elephant mounted over the entrance!

He also installed what he called ‘lovers’ neuks', double seats without a central armrest, telling reporters that he would prefer couples to do their courting in his cinema than in the local closes!

The auditorium was ‘back to front’, with patrons entering underneath the proscenium.

In 1934 the cinema was sold to A. B. King. He promptly removed the double seats (Pickard claimed King’s wife “made a fuss about them”!) and renamed it the Elephant Cinema.

The Elephant Cinema closed in 1960 and was converted into shops. The elaborate frontage has regrettably been removed.