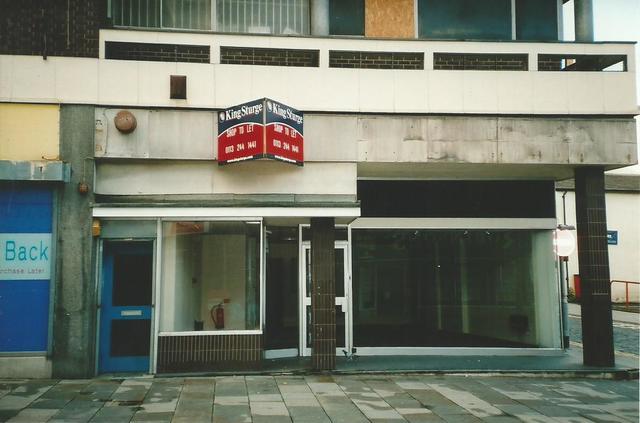 Located in Stockton-On-Tees, County Durham. In the 1960’s, re-development of the Bishop Street area produced Lindsay House, an office block with shops below and space for a small, 160-seat cinema.

The Lindsay Cinema opened in the early-1960’s, but was short-lived, and closed around 1965.

Messrs Turner’s Photographic took over, re-opening the cinema as the Turner Theatre, with film shows, mainly art-house and foreign language, three days a week. Those shows ended on 19th February 1977, although Chinese and Bollywood films played for a while on Sundays only.

This closed for refurbishment on 30th September 1989, with “A Matter of Life and Death”, starring David Niven and Kim Hunter. When it re-opened (date not known) it played films from Sunday to Tuesday.

This continued until the cinema’s operation was transferred to the new ARC arts centre in 1998. In the mid-2000s, Lindsay House was demolished when the Bishop Street area was re-developed.

I am not sure if this cinema was ever called the Dovecot. There was a Dovecot Arts Centre, including cinema, which took its name from Dovecot Street, and was located next to the Hippodrome / Cannon, and it is this operation which transferred to the ARC which opened on the site of the Cannon & Dovecot in 1998.

I am pretty certain that Ian is correct, that this cinema was never the Dovecot Arts Centre - although, rather confusingly, it does appear to have been regarded as an “arts centre” in its final years. A cutting in the Cinema Theatre Association Archive, from 1995, about the Dovecot Arts Centre’s impending move to its current premises, mentions that it opened in 1971, presumably at Dovecot Street.

The Dovecote Arts Centre was adjacent to the old Hippodrome, the site of which is now occupied by the Arc Centre. The Turner Cinema, owned and operated by Turners the camera people, was on the High Street.

It was actually above the camera shop and was entered by a single shop style door on which the publicity material, in the form of a quad or DC poster, was mounted on the inner side of the plate glass.

From memory it seated around 120.