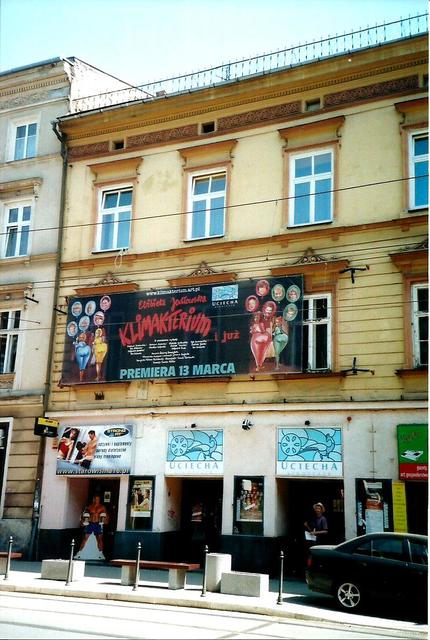 In Krakow, Poland, the Kinoteatr Uciecha (“Gaiety” or “Joy”) opened in 1912. The entrance was between integrated shops. A small lobby opened out into a larger main foyer incorporating a cloakroom on the right and paybox/refreshment kiosk to the left. This foyer had off-white Artexed walls, twin staircases to the balcony foyer, and grey marble floor tiles. A further lobby area tucked under the circle rake housed sofas and old cinema seats and a striking ceramic mural, apparently dating from the 1960’s/1970’s.

The Kinoteatr Uciecha did not see continuous service as a cinema or theatre. From about 1995 it served as an academy and nightclub, but it re-opened in March 2009 under the direction of the Arts Cinema’s manager Andrzej Kucharczyk.

In 2010 the main auditorium was used principally for live theatre, while there was a small, ‘bijou’, screen in the circle foyer.

In early-2011 the Kinoteatr Uciecha closed. In 2013 a music club/disco, Shine, opened in the building.