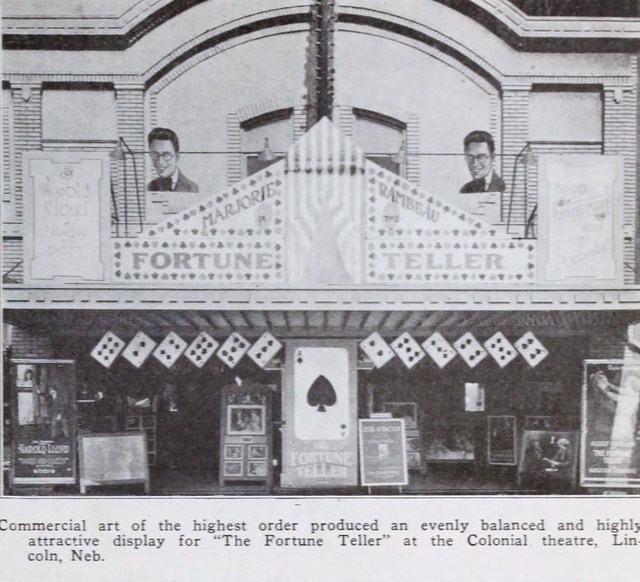 According to the Lincoln Journal Star, the Colonial Theatre was opened around 1916 and by 1921 it was operated by J.O. Hostettler of the Hostettler Brothers Amusement Co. The Hostettlers also operated the Liberty Theatre, Lyric Theatre, Rialto Theatre and Sun Theatre in Lincoln and a total of sixty theaters in Nebraska, Iowa, Kansas and Missouri.

J.O. Hostettler announced in the Journal on September 13, 1921, that he was banning all Roscoe Fatty Arbuckle films in his theaters until the jury had reached their verdict on the “man who had made millions laugh". Even after Arbuckle was acquitted in April 1922 numerous political, religious and civic groups came out against Fatty’s films playing in Lincoln again. The next recorded Arbuckle film to play Lincoln was in July 1933, 12 days after his death.

By the 1940’s the Colonial Theatre was operated by Nebraska Theaters Corp. The Colonial Theatre, after a refurbishment with new paint, new seats and a new marquee, reopened October 2, 1948, as the Husker Theatre. Geared towards the family, its opening attractions were “Bambi” and a Roy Rogers western. Film Daily Year Book of 1950 lists the Husker Theatre with 600 seats.

Briefly renamed the Esquire Theatre for a few months and playing B movies, the Husker Theatre closed in June 1953 and was converted into a Sherwin Williams paint store in July 1954.