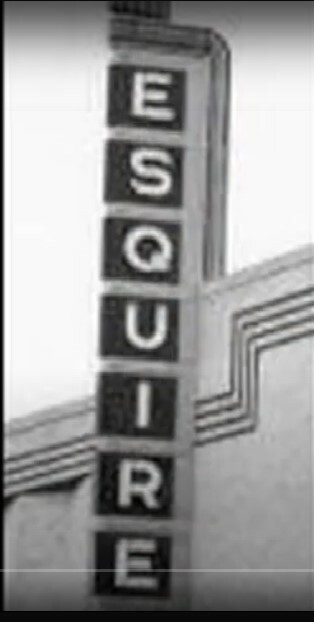 Originally built as a garage and located next to the fire station, it was remodeled into the Lyric Theatre, opening on July 27, 1922 with Thomas Meighan in “The Batchelor Daddy”. It was equipped with an organ. After another remodel in 1949, it was opened as the Esquire Theatre.

The Esquire Theatre was closed in the summer of 1953. It was demolished in 1965.

Here is a 7/29/65 article from the Modesto Bee about the death of the Esquire:

The theater business in Modesto, like other places throughout the nation, has been hard hit by television. As a result several movie houses have closed down while others operate on a part time basis
or face the final curtain. Orders have been issued to demolish
the old Lyric theater, called the Esquire in its dying days, at 721 10th Street. The Lyric, a converted garage, was the first place in town to show talking pictures with the sound track on the film.

Modesto has watched the movies from the early jumpy and flickering shadows of the nickelodeon days to today’s million dollar wide screen multicolored spectaculars. Although business has picked up, the day of the show palaces of the past is doomed, especially
in the big cities. Many major movie shrines have been demolished in
New York, San Francisco and Los Angeles where property is too expensive for theaters.

From Southwest Builder & Contractor, March 3, 1922: “Wieland, Mazurette & Wieland have prepared plans and have the contract at $25,000 for remodeling the garage at 719 10th St into a picture theater and store building for T.F. Griffin.”

This house was called the Lyric at least as late as 1949, when it was one of George Mann’s theaters.