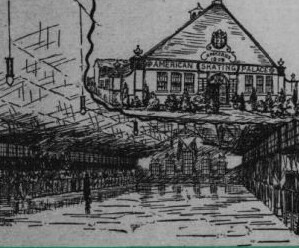 The American Skating Rink on Culverden Down, Royal Tunbridge Wells was completed in 1876.

It was screening occasional films by 1912, but is listed as a Skating Rink in the 1913 Tunbridge Wells Street Directory. In the 1914 edition it is listed as the American Roller Skating Palace (Tunbridge Wells Ltd.) and as being operated by Tunbridge Wells Picture Theatres Ltd. Needless to say the 1914 directory would have been prepared some months before publication and no doubt it was collated at the time of the cinema company taking over.

It opened as the Cinema De Luxe on the August Bank Holiday (4th August) in 1913. It was a truly massive building with 1,000 seats all on one level and employed its own orchestra. It wasn’t a success and closed in 1916 when it again turned to roller skating until finally closing in 1919.

Over the years it has been a warehouse, a factory, bus depot, dairy. It has since been demolished and housing has been built on the site.