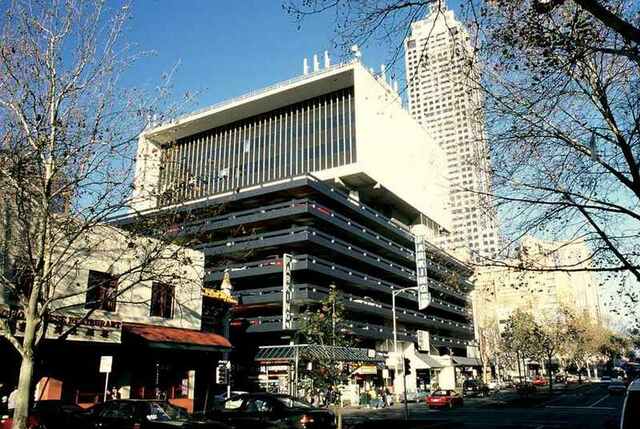 Built on the site of the former Temperance Hall/Imperial Theatre/Savoy Theatre. The Lido Theatre was part of a development which included a multi-storey car park. It was opened in 1964. It was later re-named Red Garter Theatre and finally Total Theatre which closed in 1983.

Statement of Significance: Total House, comprising the Total Car Park, Total Office building and basement Total Theatre, was built in 1964-5. It was built on land purchased by the City of Melbourne between 1959 and 1961 for the purpose of providing car parking. The site was leased by early 1963 for 75 years to the Savoy Car Park Company, who built the structure. This company was associated with Gordon Banfield, whose architectural firm Bogle Banfield and Associates, were responsible for the design of Total House, with Bernard Joyce as the project architect. Banfield and his companies owned or developed many car-parks and entertainment venues in the CBD in the 1960s and 70s. The creation of a theatre/nightclub in the basement was reported as an exciting innovation for the period.

The car-park and office building have been in continuous use since the building’s completion, while the nightclub has gone through a number of transformations. It opened as the Paris-style Lido nightclub, which provided a new type of entertainment for Melburnians. The Lido allowed patrons to enjoy dinner and drinks while watching elaborate floor shows. It hosted acts including Winifred Atwell, Eartha Kitt, Shirley Bassey, and risqué ‘nude revues’ until 1972. Since 1980 it has been a music and dance venue known as The Billboard nightclub.

Most of the shopfronts and the entry were altered in the 1980s or 1990s, and the concrete balustrades of the carpark were painted in the 1980s. The building is a reinforced concrete construction, with seven elevated parking decks, and four levels of offices over a smaller area elevated above the top deck. The car-park levels are utilitarian in design and horizontal in form, joined by a pair of ramps, with columns inset about two metres from all edges. The almost solid balustrades, relieved only by long horizontal slots, dominate the appearance of the building from the street and create a strong horizontal effect. The office block, which is raised high above the top car-park level on inset columns, takes the form of an almost solid box open only to the north and south through deeply inset curtain walls. The effect has been likened to an old-style giant TV set. There are panels of brown brick at ground level on the Little Bourke Street and lane way sides, near the car entry, and around the lift doors, mostly painted.

The carpark lifts are located on the rear boundary, though the Russell Street office lifts also once served the carpark. The shopfronts have mostly been altered; those on Russell Street have been brought forward from their original setback alignment. The office/nightclub lift opens directly onto Russell Street through a small lobby. An angled glass canopy has been added at ground level along Russell Street obscuring the first level balustrade of the car-park.

Total House is significant for architectural and historical reasons at a State level Architecturally, Total House is a landmark of post WWII modernist design, both in form and function. The design uses a cantilevered concrete structure to create bold gestures and to achieve strong forms, clearly defining the two main functions. It is one of the earliest expressions of Brutalist architecture in Victoria, and a rare example of architecture influenced by Japanese Brutalist architecture of the 1950s and early 1960s. The unpainted concrete, stacked car park decks, and in particular the balustrades, are thought to have been specifically influenced by the 1958 Kagawa Prefectural Offices, designed by the highly influential Japanese architect Kenzo Tange.

Aesthetically, Total House is a bold expression of sharply defined and floating forms. The TV-like office block, with its deeply recessed curtain walls set within a solid box, floats futuristically above the main body of the strongly horizontal carpark levels, which themselves appear to float one above the other. Historically, Total House exhibits the highest degree of architectural interest of all the multi-level car-parks built in the 1950s and 1960s in Melbourne. It is one of three whose construction was instigated by the City of Melbourne, representing their reaction to the increasing need for car parking spaces in the CBD. It is also unique for the period in combining car-park, offices and an entertainment venue, where theatre-goers or office workers could ‘drive-in’ and simply take a lift to their destination.

The theatre - ‘The Lido’

The theatre space was probably the only purpose built nightclub at the time, and during its period as ‘The Lido’, was certainly the most extravagant nightclub experience available in the city. Total House is also significant for its association with Gordon Banfield, an architect, developer and theatrical entrepreneur. His companies owned, designed and built at least six multi-level car-parks in the CBD, three of them associated with entertainment venues. He was described as the largest landowner in the CBD in the mid 1970s. His architectural firm Bogle Banfield & Associates are known for a number of landmark buildings in Melbourne.

Built on the site of the former Savoy Theatre, which was Melbourne’s first “art” cinema during the 40’s, 50’s and early 60’s.

This venue was also a popular dinner/theatre venue during the late 1960’s with many mini-musicals that attracted the best of many Australian theatrical stars. The building is now considered an important Brutalist design.