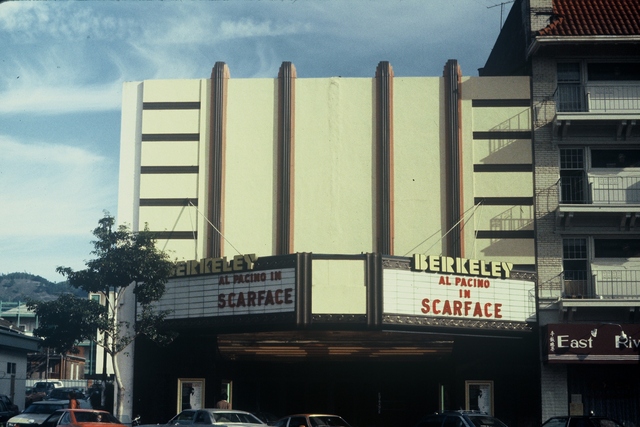 Though it did not look it in recent years, the Berkeley actually dated back to 1911; it was remodeled and modernized by S. Charles Lee in 1936 in Moderne style, and went through modest renovations over the following years.

It continued to show films until its closure in 1993 by Pacific Theatres, and stood vacant for a few years before being razed to make way for mixed-use housing and retail.

I believe Blumenfeld did operate this theater in the 1970’s.

When the Berkeley was demolished, S. Charles Lee’s Moderne facade was carefully removed first, revealing the original two-toned brick facade almost totally intact underneath. The large entrance arch still had ornamental lightbulb sockets outlining it—some of which still housed bulbs. Members of one of the local historical organizations photodocumented the original facade before it too was removed. As the theatre came down, I could see the fluted interior pilasters from S. Charles Lee’s remodel were still intact, but had been painted in vertical stripes of turquoise and maroon, with the bays between them painted off-white. It appeared as if the sidewalls had been covered over with fabric in the 1970s remodel, which had extended from the screen all the way to the rearmost fluted pilaster, which had not been covered, but had been painted dark brown (remember the “natural” earthtoned 70s, when even Moderne buildings were swathed in muddy color schemes in an attempt to make them appear more “of the earth”?).
After demolition, one could see the outline of the balcony on the common wall the theatre shared with the old hotel (or apartment building—still extant). Also, there was a surface of an upstairs office or storeroom wall, which had shreds of very old (‘Teens?) movie posters glued to it!
The terrazzo sidewalk which stretched partway out to the curb survived for a short time, but then vanished when the new building went up at the site.

I visited a theatre in Berkeley in 1978 called the “U.C. Theatre.” What was that?

The UC, Gerald, was a much-loved (some would even say legendary) repertory house that opened June 30, 1917 and closed in 2001. It’s listed elsewhere in Cinema Treasures (which is a nice way of clarifying that the UC and the Berkeley were definitely not one and the same; the only things the two had in common were that they were in Downtown Berkeley [albeit on opposite ends], both were built in the same decade [the Berkeley being, despite its appearance, six years the elder], and most regrettably, both are now closed and, at least in the Berkeley’s case, gone forever.

The Berkeley originally seated 1200 people prior to S. Charles Lee’s renovation, which brought down its saeting capacity to 779 as listed above.

Anyone know who the theater manager was in 1974/75? This theater used to advertise jointly with the Century 24 at Pleasant Hill. Is the Century 24 listed on cinemtreasures.org? I can’t find it. Does anyone remember the Century 24? Thanks everyone.

This was the first theater in Berkeley to have a balcony.

I know who the managers were in the early 80’s.