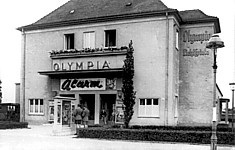 Located in the Strehlen district to the southeast of the city. The Olympia-Lichtspiele was opened in March 1938. It was closed in 1995. It is now in use as an auto repair shop.

If the following sounds like it applies to this theatre, then the architect was Paul Müller.

Olympia Theatre: The small cinema on the corner Dohnaer / Teplitz road was opened in March 1938th. The architect of the building was Paul Müller, who designed the house in modern and factual forms. Inside the foyer with the Kinokasse was the auditorium with about 500 seats. There was also an apartment on the first floor. The name was presumably based on a film theater founded at the Altmarkt before the First World War. Even after 1945 the game operation was continued in the “Olympia-Kino”. 1995 closed the theater for economic reasons and was rebuilt in the following years for automotive workshop.