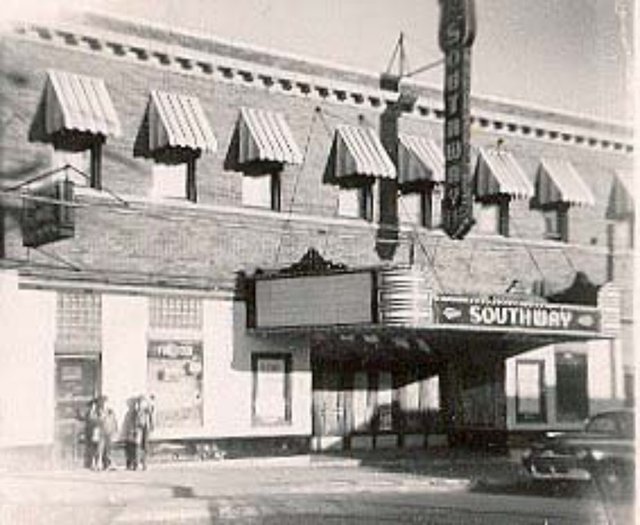 The Southway Theatre, like all Wehrenberg Theatres, was a well run and well maintained theatre. The Southway Theatre was built more or less in a stadium style with all seating on one floor with the floor sloped so that there was no obstruction of anyone seated in front of you. The theatre itself was not long but was rather wide with three aisle running from back to front. It had columns running about 10 feet apart along each side of the theater with very ornate gold leaf scones on each column. The lights would dim during the movie but the shadow from the scones would burst on the wall above giving a tree like appearance.

With its large marquee and vertical sign that rose above the theatre it was very impressive coming around the bend in South Broadway into the Lemay District. The lights and neon gave off a colorful effect in the night sky before you reached the theatre.

My name is Henry Lau and the Southway Theater was originally owned by my family. The original building was built probably about 1917, but not as a theater. I believe it was originally a tavern; it definitely was a tavern in the 1930’s The building was bought about 1937 by I.E.L. Inc. The corporation members were Irvin Lau, Ella Marty (nee Lau), and Leo Lau. Irvin Lau was my father. They renovated the building lowering the floor to slope so that the view was unobstructed.

The theater was opened in 1938. I have a picture dated May 1938 showing the building before the marquee was added and a sign anouncing the opening. I also have a picture of the building taken about 1953 showing the marquee. The theater was leased out (perhaps to the Wherenberg brothers, I don’t remember) from about 1939 to 1954. My father, brother and I lived in an apartment on the south side above the theater from about 1946 to 1960. My uncle Leo Lau and his wife Marie occupied the apartment on the north side until Leo’s death in 1978.

My records show the Southway opened on Nov. 5, 1938. By the end of the year the theatre was leased by Fred Wehrenberg, as well as the Lemay Theatre which the Lau family was interested in.

Thanks for the update.

The Lemay theater was indeed owned by my family as well. They built the original building in 1927 and then rebuilt it after a devastating fire in 1932. After the lease to the Wherenbergs ran out(about 1954), my aunt Ella Marty (nee Lau) ran the Lemay until sometime in the 1960’s. I worked there on the candy counter and later as an usher during the 50’s

Mr. Lau,
Do you have any interior shots of the theatre?
JamesGrebe

Sorry, I have only exterior shots of the Southway. I do have an old newspaper article with a couple of shots of parts of the interior of the Lemay. They were taken when the theater was remodeled in 1984 and are not very clear.

I have a couple of photos of the Southway, one taken in 1938 before it opened, and one in 1953. The “add a photo” feature to this site doesn’t work, so I would be interested in knowing how make the pictures available as you did (if it is fairly simple. I am only barely computer tolerant).

This is the current occupant:

Here is an item from Boxoffice magazine, February 1955:

ST. LOUIS-The Southway Theater in the Lemay section was reopened Friday under the management of Lloyd G. Weston, who leased the house from the Lau family. The Southway, dark for many months, was formerly operated under a lease by the Fred Wehrenberg circuit.

Last ad for the Southway I could find dates from May 1956.