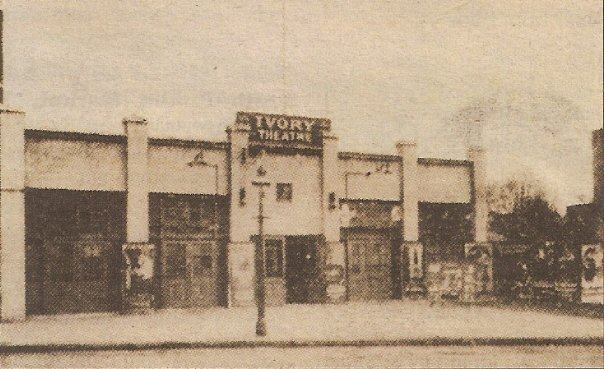 The Ivory Theatre was located in deep south St. Louis and was a neighborhood theatre. It opened in July 1916 and was still open in 1931, but had closed by 1934. It serves as a type of warehouse for a while and is now a bakery. It was told to me by the current owner that early in it’s life a couple first met there and later thought enough of the theatre to be married there.

According to this link

Is about a block away. I assume the New Ivory? The church looking building could be the Saint Boniface Rectory. Link here:

Actually, the Rectory is between the old church and the Ivory, according my Googling…

Boy this is getting more confusing. According to the photos at the 2nd link I provided, the old church, which is no longer a church, is or will be the Ivory Theater. There’s even some not so good pictures of the interior.

Last photos are from September 2007 plus this note at the end:

So who knows what that means….

The (old/original) Ivory opened in June 1916. The closing date has yet to be definitively determined, but the structure was converted into an A&P grocery store in 1938.

Here is a brief article about the opening of the Ivory Theatre from the July 8, 1916, issue of The Moving Picture World:

“ST LOUIS, Mo.—The Ivory theater, which has just opened its doors to the public at 7712 Ivory street, gave a smashing big program of pictures on opening night, and had an excellent orchestra to accompany the pictures. The Ivory is a new house operated under the management of the Ivory Amusement Company, with E. J. Paule at the head of the enterprise. Mr. Paule was formerly a councilman of St. Louis, and on opening day the lobby of the theater was filled to overflowing with floral offerings from his many friends and business associates.

“The Ivory is a model and up-to-date theater in every respect. The seating capacity is 850 and the two new Power’s 6-A machines and other furnishings of the house are of the most modern and approved designs. The Ivory has been playing to good audiences ever since opening day, and is a very attractive addition to the neighborhood.”

What is now called the “Ivory Theatre” has nothing to do with the old one. The new one is in the former church at the corner of Ivory and Schirmer. The old one is being used as a bakery space currently, and is two buildings south of the above mentioned intersection. Between Feraro’s Jersey Style Pizza and a residence.