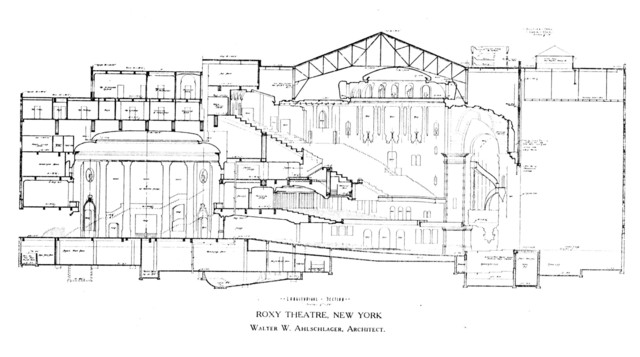 If a picture is worth a thousand words, then one look at photos of this palatial movie palace is worth about a million. Often cited as the most impressive movie palace ever built, the Roxy Theatre was called “The Cathedral of the Motion Picture” by its creator and namesake, Samuel ‘Roxy’ Rothafel. Roxy was arguably the greatest showmen of his time and he built a theatre that has seemingly outlasted his own legend.

With its 6,214 seats and multi-tiered balconies, the Roxy Theatre was the showplace of New York City and of the nation. Construction began on March 22, 1926 and it opened on March 11, 1927 with a world premiere presentation of United Artists “The Loves of Sonya” starring Gloria Swanson. It was designed by architect Walter W. Ahlschlager of Chicago (who also designed New York’s Beacon Theatre), with interior decoration by Harold W. Rambusch of New York. Its rather modest entrance at the corner of the Taft Hotel building disguised one of the most cavernous lobbies ever built and a magnificent auditorium that has lived on in its patrons' imagination. Whatever adjectives can be used for the Roxy Theatre, they all fail to signify the theatre’s achievement.

The Roxy Theatre was equipped with three Kimball organs. The auditorium organ had 29 ranks installed under the stage and 3 ‘fanfare’ ranks above the proscenium. This magnificent instrument had three consoles. The main console had 5 manuals and was opened by organist C.A.J. Parmentier, while the two 3 manual consoles were opened by organists Dezso Von D'Antalffy and Emile Velazco. There was also a Kimball organ in the Grand Foyer Rotunda which had 3 manuals and was opened by organist Lew White. A 2 manual Kimball organ was located in the theatres' recording studio located on the roof above the proscenium. There was an 110-piece Roxy Symphony Orchestra, conducted by Erno Rapee.

On September 1, 1953 the Roxy Theatre was equipped with CinemaScope and a curved screen 65ft wide and 26ft tall was installed to screen a formal international showing of “The Robe” starring Richard Burton. The world premiere of the movie was held at the Roxy Theatre the following evening. Sadly this brought an end to stage shows as part of the program. On April 9, 1958 it was equipped with Cinemiracle to screen “Windjammer” on a curved screen 100ft wide and 40ft tall. Sadly, the decline in attendance that had begun in the 1950’s spilled over into the early-1960’s and the Roxy Theatre closed with Dirk Bogarde in “The Wind Cannot Read” which began its run on March 9, 1960. Despite numerous protests, it was razed in the summer of 1960 and demolition was completed by the end of 1960. In its place sits a nondescript and unremarkable office building. The neighboring Taft Hotel survives to this day (now the Michelangelo Hotel) and is the only evidence that this epic structure was ever here. A TGI Friday’s restaurant and a KFC restaurant now occupy the theatres' original entrance.

The legacy of the Roxy Theatre is almost as impressive as the theatre itself once was. The name ‘Roxy’ has since adorned movie theatres, nightclubs, restaurants and a host of other establishments around the world all attempting to give to their patrons what Roxy always brought to his own: entertainment.

The end of the Roxy Theatre signified the beginning of the end for thousands of movie palaces across the country. With its destruction, New York City began to destroy its past for urban renewal and the city, and movie palaces, have never been the same.

Te souvenir programs, roxy sold many over the years including: Wilson,RAZORS EDGE, ROBE, ALL ABOUT EVE, CAROUSEL, LING AND I, EGYPTIAN. A FAREWELL TO ARMS, LIL ABNER, KING AND I, BIG CIRUS. A,THERE’S NO BUSINESS LIKE SHOW BUSINESSES, all come to mind

to Joseph thanks for the info. of the ones you mention the only souvenir program I have as stated was for The Robe. its interesting I’ve never come across the others you mention either in memorabilia shops or online.

I believe much of the theater was curtained off like when the Capitol became a roadshow house to appreciable reduce capacity. Though there it was done in a more permanent way unlike the Roxy where everything was removed so it could go back to being a presentation house. The same permanent thing happened with the Strand, Rivoli and Loew’s State. I believe the Criterion was left alone. Not sure about the DeMille.

The roadshow presentation of Windjammer was a desperate but failed measure to keep the Roxy a destination ever since the late 1950s when this grand movie palace with 5900 seats was no longer able to get exclusive runs on first-run films. The tragedy is that the beauty of the theater could not be either maintained or retained if it were to be cutup into a multiplex. The large staff necessary for keeping it going was also an expense not supported by drastically declining grosses. The miracle was that its step-sister the Radio City Music Hall (also the work of Roxy)was only saved by the efforts of a small and passionately dedicated group of insiders.

And when the Roxy was torn down the Music Hall was still successful getting first run films that people wanted to see and a popular NY destination must. By the end of the 60s that was over because of the cultural shift in filmmaking and film distribution and urban decay. It only held on well into the 70s by the grace of the Rockefellers.

There was no grace of any kind in how the Rockefellers dealt with the future of RCMH. They wanted it torn down…all the way to a court battle/decision. For all the facts, you must read “Saving Radio City Music Hall” by Rosemary Novellino-Mearns. You will see how powerful and inspirational a small group of people can be to save something beautiful and cherished.

Reminder from The James Dean Museum via Facebook: October 10, 1956 On this day, “Giant” premiered at the Roxy Theatre in New York City with the local DuMont station, WABD, televising the arrival of the cast and crew. Image from the gallery posted in 2011.

Giant has just come out on 4k. From reviews some of it looks great and some of it not so great. The movie is 3 hours and 20 minutes. And it played the Roxy with a stage show which is amazing. A very long running time for a show that had continuous performances.

while it is sad I never got to enjoy the Roxy people have to realize that HUGE theaters like the Roxy were living on borrowed time the split micro nano second t.v. became commonplace in the American home.