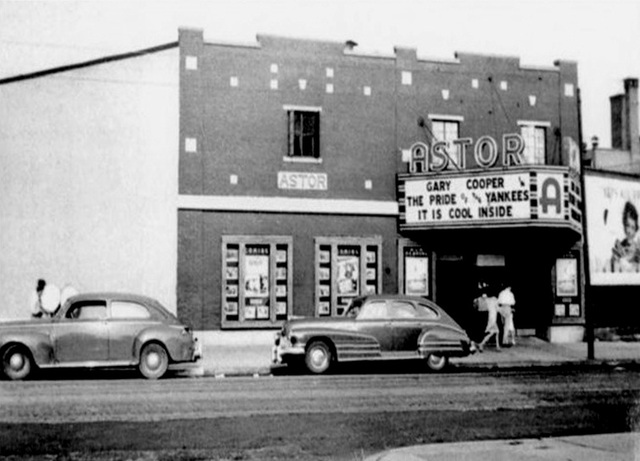 Opened in 1913 as the Poplar Theatre, it was designed by architect Frederick E. Beall with 200 seats. It was enlarged in December 1921. The building has undergones many renovations over the years, and the original entrance has been bricked over, with a new entrance now on the north corner.

It was rebuilt and reopened as the Astor Theatre on November 14, 1927. It was now in a Spanish design, the work of architect J.F. Dusman. It was equipped with a Kimball organ. In 1929 it was equipped with Vitaphone & Movietone sound systems. There pans in 1930 to enlarge the theatre to 2,000 seats, but the project never went ahead. The Astor Theatre was closed in the fall of 1953. It reopened under new management in April 1954, operating as an African-American theatre, which closed in 1955. It was converted into a supermarket (in 2017 Food City Express).

There are a few reminders that the building was once a movie theatre however. On the facade of the theatre, a white stone has engraved “Astor”, which over the years had faded, but is still readable. On the rear of the building is an old painted sign for the theatre where you can clearly see “Poplar Theatre”, but that’s about it.

Here are some photos:
http://www.kilduffs.com/AGA.html