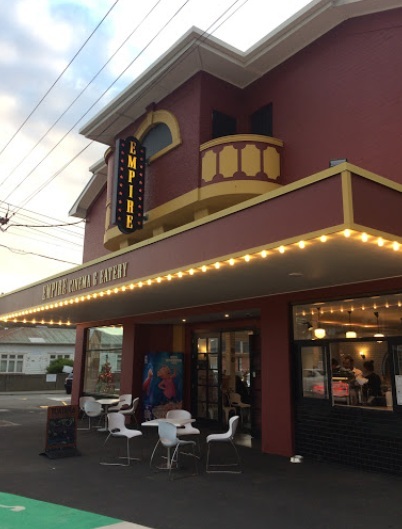 Located in the Wellington suburb of Island Bay. The 600-seat Empire Theatre was opened on 21st March 1925 with “The Last of the Duanes” starring Tom Mix. The building also contained shops and a billiard hall.

The billiard hall was closed in 1928 and the space was used to extend to auditorium to increase the seating capacity to 651. It screened its first ‘talkie’ on 14th June 1930 when Nancy Carroll starring in “Honey”.

The theatre recieved structural damage in a March 1943 earthquake and was closed until repairs were carried out and it re-opened as the New Empire Theatre in October 1943. It closed as a cinema on 1st June 1964 with James Robertson Justice in “Foxhole in Cairo”.

The building became a shoe store and later a hardware store, which closed in 2004. New owners took over and it was refurbished and re-opened on 1st September 2005 with Johnny Depp in “Charlie and the Chocolate Factory”. After another change of ownership and a refurbishment into a twin screen cinema with seating for 49 & 65, it re-opened as the Empire Cinema & Eatery with Helen Mirran in “Woman in Gold” on 14th May 2015.