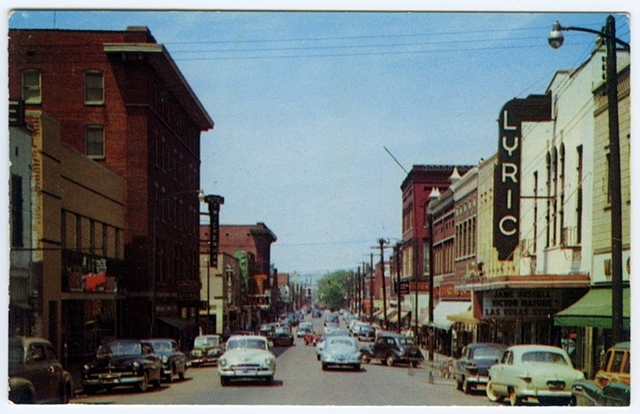 The first movie with sound was shown in Hunstville in 1929 at the Lyric. The Lyric theatre was destroyed on December 25, 1930 by a fire that swept through part of Washington Street.

The theatre was rebuilt after the fire and reopened on December 7, 1931. The article from the Huntsville Times stated that this was the fourth theatre built on the site by the Lyric Amusement Company within the last 21 years. The theatre seated 902 people and the entire building was indirectly lighted. It had a Western Electric sound system and the marquee sign was operated by improved flashers operated by mercury tubes, which did not interfere with local radio reception like the previous ones. By 1941 the Lyric Amusement Co. had become a subsidiary of the Nashville, TN based Crescent Amusement Co.

The Lyric Theatre’s last day of business was December 21, 1978. The building was destroyed by fire on January 8, 1982 and nothing has been built on the site since.

A 1986 view of the boarded up remains of Lyric Theatre in Huntsville.