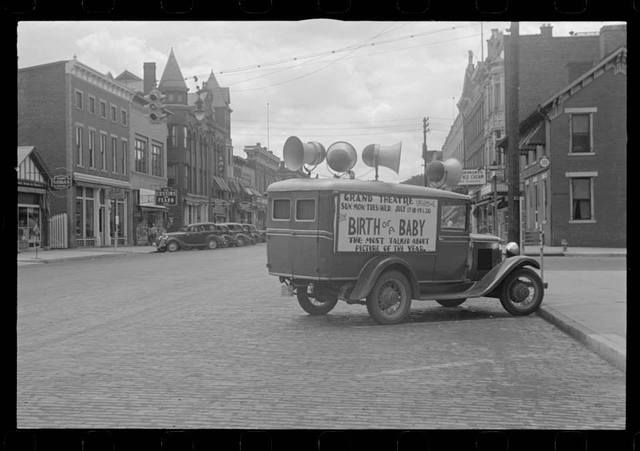 The Grand Opera House was opened in 1888. It was still operating in 1937. By 1938 it had been renamed Grand Theatre and was operated by Chakeres Theaters Inc. It was closed in 1962 and demolished for a bank drive-up.

1938 photo in downtown Circleville added, promoting the Grand Theatre’s showing of “Birth Of A Baby”.

The June 9, 1962, issue of The Circleville Herald had an article about the closing of the Grand Theatre. The June 26 issue of the paper said that the building had been sold at auction, the winner being a local bank with plans to demolish the theater and establish a drive-up teller service.

The June 9 article said that the Grand Opera House had opened in 1888. Chakeres Theatres took over operation at the beginning of 1939. The theater was located at the corner of N. Court Street and Pinckney Street.

The advertising truck in the vintage photo DavidZornig uploaded was parked in front of the theater, which is itself out of the frame. A new building for The Savings Bank has been built on the theater’s site and uses the address 118 N. Court Street.

Thank you for the additional info. I couldn’t find anything that wasn’t in the pay sites of old newspaper archives.

The Wurlitzer records show that the Grand Theatre purchased a model 140 pipe organ in October 1928. It was a tiny instrument of only 4 ranks and a “straight rail” console rather than the more familiar horse-shoe console associated with theatre organs. At an unspecified date, it was relocated to Neil Avenue Methodist Church, Columbus Ohio, which closed in 1995. Fate and location of the organ is unknown.

Maybe the organ is still in the Methodist church building?

It might be that the Methodist church is now an Ethiopian Orthodox church, if it was in the old building at the northeast corner of Neil Avenue and Goodale Street. The organ could still be there, or the Methodists might have taken it with them.