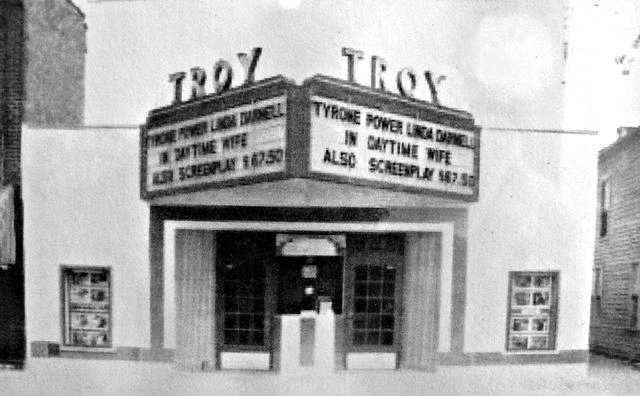 The Troy Theater was built in 1940 to serve a town of 2,000 and smaller rural population. It was constructed of Waylite blocks (furnace slag cemented together under high heat and pressure). One unique feature was the installation of 27 love seats (for two), the first of their kind in Wisconsin.

Although touted as a fireproof theater, it was gutted by fire in 1974. The village hall was erected within the remaining outside walls.

(Janesville Gazette, May 28, 1969)
EAST TROY â€" John F. Benjamin has received word of his appointment as midshipman at the U.S. Naval Academy, Annapolis, Md, He was nominated for this position by Sen. William Proxmire.
Benjamin will be graduated from the East Troy High School June 6. He will report June 30 to the superintendent of the Naval academy to be sworn in as midshipman, U.S. Navy.
While in high school Benjamin has been active in the various bands, served as manager for the football and basketball teams, is a member of the Photo Club, Letterman Club and National Honor Society, ranking eighth in his class scholastically.
He is a member of the First Congregational-United Church of Christ and its youth organization. Pilgrim Fellowship, in which he has been president the past year.
He has worked as projectionist at the Troy Theater the last two years. His employer, Maj. Loren Husten, has advised him through the years of preparation for his chosen career.
His parents, the Rev. and Mrs. R. B. Benjamin, invite his friends to a reception in his honor immediately following June 6. It will be held in the lounge and recreation rooms at lounge and recreation rooms at First Congregational Church here.