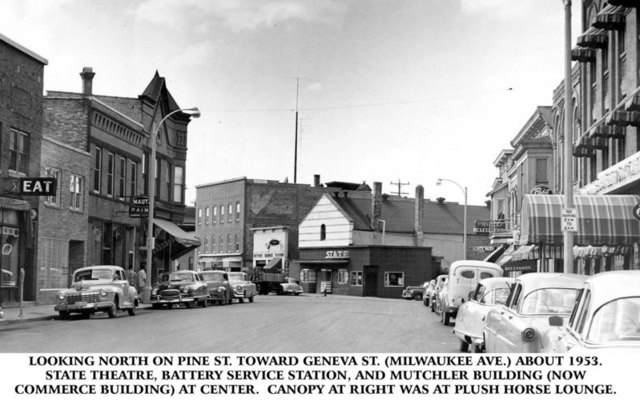 A very modest film and vaudeville theatre which served downtown Burlington from 1911 into about 1950, at which point it was purchased by the city and demolished to provide parking for downtown shoppers. Aside from its owners and managers, little is known about the structure. Some exterior photos exist.

(Racine Daily Journal, Wednesday February 22, 1911)
OPEN NEW THEATER
Racine People Attend Initial Performance at Burlington
Mr. and Mrs. William Tiede were at Burlington last night with twenty other Racine people, attending the opening of the new Crystal theater, Edward Westberg, formerly of Racine, Manager. A handsome souvenir program was issued. Mayor Zimmermann opened the house with a pleasant and appropriate address, and a good program was presented. Master Harry Bernstein took part and the other numbers were up to date. The theater is a handsome and up to date place of amusement and one the people of Burlington are proud of. Mr. Westberg is a thorough theater man and will see to it that the Burlington people get all of the high grade attractions and pictures in the business.

Can’t find a Geneva Street in Burlington. That must be the reason the Google Map is not working very well.

Anyone have a better address, more info or photos?

It opened as the CRYSTAL but I have no indication when the name changed at this time. Its location is the corner of Commerce and Pine Street. There’s a distant photo of the STATE just before its demolition (and the Rein building immediately west of it) in the Racine Journal Times of July 2, 1953.

City Landmarks Will Disappear With Razing of Two Buildings

Razing of two buildings in downtown Burlington, to make way for a new city parking lot, is destroying two of the city’s oldest landmarks.

The land on which the two buildings are located was obtained by Silas Peck, one of the early settlers of Burlington, from the United States on March 8, 1839. The property on which the State theater building is located was sold to a series of buyers and on Nov. 10, 1870, Charles Bollow purchased it. Then only a small wagon shed was on the property.

Bollow’s heirs sold it to Barney Brehm on April 10, 1895. At that time a Joseph Wackerman had an implement store at the site. The Bollow home stood between the building and Short St. and later was used as a clubhouse for the Burlington Cycle Club.

After Brehm bought the building Bert Mathews operated a livery stable there and later Brehm used the stable to house the horses used in his drayage business.

In 1911 Brehm built an addition to the existing building and remodeled it into a theater. Ed. Westberg and Charles Thiede, both of Racine, who were operating a movie house in the building that now houses the Tobin Drug Store, Chestnut St., took over the operation of the new theater.

In 1926, Willard L. Uglow purchased the building from the Brehm estate and operated the Crystal theater there for only a short time, It remained closed for several years but reopened shortly after the burning of the Orpheum theater left the city with only one movie house. Sound equipment was installed and some vaudeville acts were booked. Later it was remodeled again and the name was changed to the State Theater. J. H. Yeo, owner of the Plaza Theater, leased the building and installed new projection equipment. Yeo operated the theater until a year ago.

The City of Burlington recently purchased the two sites to be used for off street parking lots. A total of $27,500 was paid for the two properties. Workmen are now tearing down the two buildings.
(Accompanied by a photo of the demolition.)

Some photos of the STATE exist at Wisconsin Theatres www.onelist.com/group/WisconsinTheatres .

Workmen started Saturday to tear down the State Theater building, Geneva and Pine Sts. to make way for one of two proposed new city parking lots.
The William J. O'Neil Co., Lake Geneva, was awarded the contract to raze the building, along with the adjoining building and the two other structures on another site on Washington St., between Dodge and Pine Sts.
O'Neil reported to Burlington police that over the weekend someone gained entrance to the theater building and stole a quantity of salvage lumber and electrical cable that had been torn from the building.

Martin Prailes has sold the Crystal Theatre in this city to E. D. Perkins of Waukesha and the latter took possession and opened the same for business last Saturday. Mr. Perkins has already taken up his residence in this city with his family. The Crystal, Burlington’s first picture theatre, had been dark during the holidays.

(Racine Journal News, July 31, 1914)
The Crystal theatre is going to offer a $500 piano as a prize in a contest which they are going to put on in the near future. Watch for the announcement. The piano is now on display at the drug store of Flack & Miller.

(Racine Journal Times, March 29, 1948)
State Theater Being Remodeled
Remodeling of the State Theater, started some weeks ago, is expected to be completed soon.
Jack Yeo, operator of both of the Burlington theaters, said the interior of the theater will be completely remodeled. New sound equipment, a new screen and an air conditioning plant will be installed.
The floor of the lobby and the aisles will be newly carpeted and all of the seats repaired. The front of the building also will be renovated.
It is planned, Yeo said, to operate the State at least five nights a week. Up until now the theater has only been open on Saturday and Sunday nights.

1910 – Owners of Crystal Theater announce plans to build new theater at Pine Street and Geneva Street (Commerce Street and Milwaukee Avenue). It opens in February 1911. The Vandette Theater opens in the Fenn Building, the former home to the Crystal. It closes operation in a month.

1930 – New sound equipment installed at the Plaza and at the Crystal.

1953 – City Council votes to buy property where State Theatre is located for construction of a parking lot.

Originally The City Of Burlington Have 2 Theaters. The State And The Orpheum. The Orpheum Theatre Was Demolished By A Fire On January 28th, 1937.